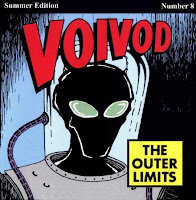 Leave it to Voivod to come up with the gimmick to include 3D glasses with a CD, but that is indeed what happened for the limited edition of the 7th full-length album, the last for MCA records and the first without longtime bassist Blacky. To be honest though, I'd risk being mauled by Martians to get a glimpse of Michael Langevin's artwork, and was not disappointed with the great concept behind the booklet, and lucky to buy that version day one. Like Angel Rat, the songs here each have their own, individual sci-fi concept, many with a more nostalgic tendency than previous albums. So the various 3D graphic panels and the comic book kitsch match up well with their themes, and with the possible exception of deciphering Nothingface, I doubt I've had so much fun with the superficial aspects of a Voivod album.

Of course, they'd be pretty hollow without some damn good music, and The Outer Limits provides plenty of it. God, I remember these days, when I could head out to the store on a release date and pretty much count on my favorite bands to release quality albums, evolution or none. For the Canadians, this would be the last of these, for not only was this Snake's intended swan song with the band, but they'd also lose their major label status. Most people in the 90s were far too busy with alternative rock, hip hop, grunge and hardcore music to really give a fuck about the creative side of the metal spectrum, and Voivod were clearly a casualty of this trend, especially when you consider the buzz they had been generating through the latter half of the prior decade. At the very least, though, The Outer Limits sounds like a lot more push was put behind it than Angel Rat, at least in terms of studio work. This sounds like the last album's more muscular brother, with brighter, mightier guitar tones, and a less psychedelic mix fit for the Saturday Night at the Drive In aesthetic that permeates much of the songwriting.

Similar to "Panorama" or "The Prow", you've got some uplifting, energetic tracks here with a few of the most catchy and accessible choruses the band has ever written, namely the opener "Fix My Heart" and closer "We Are Not Alone", such proud exclamations of joy for the band's lyrical niche that I practically had to restrain myself from crying out in happiness. Piggy's got a lot of flare on this record, almost like he's at long last taking his place as an 80s guitar god, so expect some craziness in both the rhythms and blaring leads, often with a bluesy hue. The Outer Limits is indeed more 'metal' than the two previous albums, but that qualification takes the place of a lot of driving, positive melodies and not so much the murk and groove of a Dimension Hatröss. That said, there are still plenty of creepy moments, or vivid atmospheric tweaks to his performance that it feels like a Voivod, just a Voivod that was cheery to head out the studio and lay these tracks down.

Though he was only a session musician, Pierre St. Jean keeps the bass busy enough that we can forget and forgive the lack of Blacky. The tones are cleaner all around, with less distortion but plenty of low end presence thanks to the higher pitch of the guitars. Drums are very polished here, but more powerfully driven than on Angel Rat, and Snake brings some of that due aggression back from, say, Nothingface. The best moments on this album are admittedly the atmospheric guitar passages reigning cuts like "Moonbeam Rider" and "Jack Luminous", but for 54 minutes, there are few moments worth complaining about. Voivod return to the Pink Floyd cover well with a brazen rendition of "The Nile Song", and while it lacks that hypnotic splendor of "Astronomy Domine", it's nonetheless quite excellent.

The crowning gem, for myself, was the 17 minute epic "Jack Luminous", the tale of a TV-faced invader from beyond the stars who is coming for Earth, and the disenfranchised alien who comes to warn us. First time the band ever attempting such a swollen concept within just one track, and it truly pays off without ever growing dull. Otherwise, you've got plenty of cuts about kitschy, out of this world themes like rocket ships, time travel and, perhaps more ominously, a near abandoned space hulk soaring through the void. This might just stand as one of the band's most professional sounding records, but it's brighter, carefree aspects and looser concepts haven't stood the ages with me like some of its predecessors. That said, it's a Voivod album. A great one. Not much else there sounds like it, and well worth owning, 3D glasses or not.