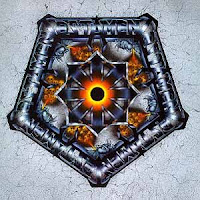 Like many other listeners, my initial reaction to Testament's 'dumbing down' was one of shock and confusion, concerns that the band was attempting to ape the enormous success Metallica had with their own simplified, streamlined 1991 record The Black Album. No way man, another of my favorite West Coast thrash bands sold itself down the river! Sure, there were a few catchy tracks from the onset of exposure to this record, like the massive opener "Electric Crown" or the strangely uplifting "Agony", but for whatever reason, I found that at the time, this just wasn't what I was interested in hearing. I had been on a death metal binge for a few years, and black metal as we know it was just starting to become available (through imports), not to mention the other sounds like grunge, rap and 'alternative' which peaked at the dawn of the 90s.

But I was wrong, and I've spent the past 20 years repenting just HOW wrong, because over time, I've not only grown to love this beast, but it's become my absolute favorite of their full-lengths to date. An opinion, that, to the thrash purist, must be like attempting to practice witchcraft at a Puritan prayer club; but I don't spend hours listening and typing these reviews out to lie, people. Even if you've never trusted my word on anything else, or burn wicker statues of me on your front lawn, I'd implore detractors of this record to set the proper mood, and give The Ritual another chance, because it's one of the truly underrated works of those parched early 90s, where quality metal was a rarity more than a commodity. Yeah, it existed if you knew where to find it, but the likelihood of picking up even a major band's new record and coming out satisfied were pretty slim. It's important to note that, unlike Metallica, who had a decade of huge sales within the diminished creative returns of their 'hard rock' years, this would prove a one-off for Testament, the last of the classic lineup's collaborations, before initiating the train depot arrival/departure of temporary members and pursuing a more modern, aggressive direction through Low and the ill-met Demonic. So if you seek this more atmospheric, 'heavy metal' incarnation of Testament, there is but one place to turn...

Thankfully, that place is still open and ready for your business. This album never grows old, a result of the simple and focused songwriting, immortal chorus melodies and raucous, airy guitar tone. Although one could still discern a 'thrash' element to the riffing, thanks to the heavy use of palm mutes, The Ritual has more in line with a mainstream heavy metal sound. Like The Black Album, or perhaps doom royalty Trouble's Manic Frustration (another unsung, excellent record from this same year). Essentially, they decided to peel back the years and return to the roots of what made them interested in metal, and thus the compositions feel just as Deep Purple as they do Master of Puppets. Don't get me wrong, the boxcar tone of the guitars is heavy as balls, and there is plenty to bang your head or fists at, but The Ritual is so suffused with vocal echoes, reverb and beautiful, blues-born leads and melodies that it's built more for a road trip than a mosh pit. Seriously, whether you're behind the helm of an 18-wheeler of your mother's station wagon, this thing is the perfect accompaniment to a long highway or back-road trek, capable of making the journey just as emotionally resonant as the destination. One of the reasons I've been able to continually connect to it and enjoy it for such a long time.

This is not so much an album of nuance or innovation, but one of an 'alternate history'. Like a novel by Harry Turtledove, it answers its 'what if' scenario in style. Just the production on The Ritual alone breeds subtleties that fasten themselves to the ear (and heart) with each exposure, and what initially was a mild reception to just a handful of tracks has blossomed into a love of nearly every moment of the record. The one exception might be the closer "Troubled Dreams", which I often forget is even there, but it still fits the aesthetics of this sound rather well, its riffing structures a nod to the band's past. Even the power ballads on this crush their wimpier predecessors like "The Ballad" or "The Legacy"; the sultry, evocative mix and the superior vocals seem so much more heartfelt. Testament wrote those tracks to get on the radio, or to get laid, but they wrote these for dudes deep in their cups at the local bar, wondering where the next paycheck will come from. In particular, "Return to Serenity" is memorable, with its glossed cleans, distant hovering micro-leads and then a build-up with reminds me of the drama present in Megadeth's "In My Darkest Hour", with Billy clearly meting out a stronger performance than their earlier lighter-swaying fare.

The heart of this record, though, isn't its most sober moments, but the forceful, ass-kicking of the riffs native to songs like "Electric Crown", "Agony" and "The Sermon" which are impossible for me not to headbang to, or the slower, pulverizing grooves that comprise "So Many Lies" or "As the Seasons Grey". Though the song structures are pretty simplistic, with only a few central guitar progressions slathered in great leads and vocals, there isn't a single riff throughout that feels unnecessary or out of place. Greg Christian's bass tone is not so prevalent as Practice What You Preach, but more a flood of depth that anchors the muscular rhythm guitar. Louie Clemente's drums are pure hard rock, slight in technicality but long on power. As usual, the leads are very well prepared by Skolnick, peaking through the beautiful escalation of "As the Seasons Grey", but suitably shredding and acrobatic even on the intro "Signs of Chaos" or the swaggering rise and fall of "So Many Lies". At times, I felt a little Criss Oliva (Savatage) tone and technique in a handful of the rhythm guitar, never a bad thing, though Testament is far burlier.

Lyrically, this is probably the most personal of the Californians' works, and they deal with a lot of topics like loss, betrayal, and personal freedom. Again, we're not dealing with much complexity in their craft, but thanks to Chuck's infallible, Hetfield-esque inflection, almost every line on the album drives home its point, and where he erupts into the chorus of something like "Agony" I get chills down my spine, even in lieu of the predictable chord pattern below. It's the blues man. Iron clad blues, beating you within an inch of your life while granting you the wisdom to survive. Paired with the sheer gravity and pummeling force of the music, the message is unstoppable, and it's no wonder this album has grown so far in my estimation through persistent listening. I realize this isn't the shit-kicking nuclear thrash people want from Testament; the increased accessibility, diminished speed and riff mechanics exorcise it from that genre almost entirely. It's only perfect for about 45-48 minutes out the 55, but nevertheless, The Ritual is heartfelt, brave and brawny music which never loses its luster, and when did that stop being important? A rousing success of an 'experiment', and if I'm the only guy who loves this until he's old and grey, than I'll play the odd man out proudly.