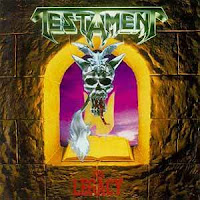 The Legacy has never exactly been my favorite West Coast thrash opus of the 80s, but it's nonetheless a superb debut that warranted all of the respect and attention foisted upon it, and it remains one of Testament's finest offerings in their their 25+ years of existence. After changing their name from the less exciting 'Legacy', the Californians had just about everything going for them that any band could have wanted at the time. Distinct and memorable vocalist? Check. Potent and forceful selection of riffs? Check? Lead guitar god? Check. Even the band's name and logo were the sort you'd glance at once and never forget, so it's no wonder that the quintet was chosen as one of Atlantic Record's 'champions' in the metal arena of the 80s, alongside Savatage and Overkill, both of whom coincidentally released their career-spanning masterpieces in the same year this dropped...

...and while my feelings for this debut might not be so strong as for Taking Over or Hall of the Mountain King, there is no doubt that this thing has more heart than Mola Ram's pantry, and more fire than an oil drum in some Oakland ghetto back alley on a cool winter night. Testament's modus operandi was admittedly a wilder response to Metallica more than anything else, and there's not much use in denying the correlations of sound. The dense, chugging tone of the guitars, and their constant, forward-barreling charge riffs are highly redolent of Master of Puppets. Chuck Billy's vocals were like a feral James Hetfield if he had been raised by wolves and then later rescued by Native Americans and missionaries, who taught him English as part of his salvation. His howls are like beefed up approximations of James' screams on Kill 'Em All, and he cuts a far more imposing figure for such an insanely nice guy. There's also an epic, dramatic structure to this early Testament songwriting which recalls Puppets' high ideals and ambition. I wouldn't place this on quite the same pedestal of quality as its forebear (after all, that album is about the tops for me and this genre), and the mix of the guitars in particular can get a little muddy, but it certainly does daddy proud.

Where the two greatly diverge, however, is in the melodic structuring of guitars. Where Metallica's leads were borne off NWOBHM and hard rock/blues, Alex Skolnick had a heavy outside influences from jazz and classical music, and this translates heavily to both the solos and harmonies, despite both he and Hammett sharing the esteemed shredder Joe Satriani as a teacher. The result is this very ominous, spectral (and often surgical) feel to the tunes, well groomed to the concrete dynamics of Eric Peterson's strong palm muting rhythmic ability. Louie Clemente was a harder hitting drummer than Lars Ulrich, though his beats are regulated through the album and never indulge themselves beyond the necessary. Greg Christian is a firm, dextrous bassist, but he'd really shine later with Practice What You Preach, where you can hear his playing more clearly outside of the rhythm guitars. Here's he rifling along, smothered in the weight of the primordial, processed cellulose of the chugging. All told, though, Testament was loaded with weaponry from the start (even when they had Steve 'Zetro' of Exodus on vocals before Billy), and it really shows through in the compositional level of this debut.

There are about a half dozen tunes here standing out from the rest, but there isn't one among the nine that drags its feet behind in terms of sheer energy and momentum. "Alone in the Dark" is a particular favorite, for the melodic chorus vocals, ghostly melodies, and the percussive meter of the vocals in both the verses and the kickass breakdown. But then you've also got the equally ambitious "Apocalyptic City", with an excellent intro of clean guitars, leads and Christian's lines at long last muscling onto the listener's radar (this whole sequence is also a nice foreshadowing for various moments on The New Order). This is followed by a pair of the best, most melodic rhythm charges of their career, and the pre-chorus and chorus sequences are likewise brilliant as they erupt into ballistic speed. Truly an anthem worthy of a post-nuclear dystopia in which bands of rabid, ravenous mutants battle with motorcycles and spiked chains over the last surviving mate-flesh; and you can envision all of this in your mind while listening. Further notables includie "Burnt Offerings" with more of Alex's haunted, unforgettable leads, and some killer scale-driven verses; and "Raging Waters", which no swarthy thrashing sea-dog worth his salt should ever live without!

The other popular tracks, like "C.O.T.L.O.D. (Curse of the Legions of Death)", "Over the Wall" and "First Strike is Deadly" haven't resonated with me quite so much, but they're still a deadly arsenal of pent up, volatile riffing patterns that provide a lot of the album's mosh-worthiest moments, and in truth you could listen to the full 39 minutes of the album front to back to front again for 20 years and never get tired of it. My one real complaint about The Legacy is that the production seems a little dated, not nearly so pristine or immortal as Reign in Blood, Master of Puppets, or other A-listers of the scene. Both my cassette and CD versions have both suffered from the punchy, semi-muffled tone of the rhythm guitar, and in my own ignorance I've never looked up or tracked down a worthy remaster. Not necessarily a deal breaker, and it hardly can distract me from songs this well-written, but I always felt there was a level of polish missing from this album that would have amplified my appreciation, and to this day it slightly skews the album's value to the negative (though The Legacy's successors do a fine job of cleaning it up).

That aside, who in the disreputable fires of Hell wouldn't wanna own this thing? If not, you are one sloppy, unprepared cockroach who won't last long in the crud and cracks once Armageddon rains from the sky in a metallic nuclear symphony. It's a fantastic start to a largely consistent repertoire, and instantly established Testament (for good reason) as one of the go-to bands beyond the 'Big Four' of US thrash. The lyrics are steeped in horror, violence, even some political relevance as in the opener "Over the Wall". The Legacy is one of those records that, with ease, helped validate thrash metal as a viable artistic playground in which to forage and toil. It was sophisticated enough for guitar gurus, heavy enough for pitbreeds, dark enough to let the listener's imagination soar through its dark network of urban and subterranean corridors. Not the best of '87 by any means, but a survivor, through and through.