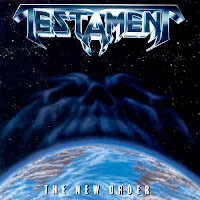 If this were a just world, or perhaps a 'juster' world, The New Order would have vaulted Testament into the ranks of thrash royalty, as it easily edged out a few of the formative 1988 works by higher profile acts like Anthrax (State of Euphoria) and Megadeth (So Far, So Good... So What!), who ending up making wider ripples in the pool. Of course, that's not the universe we actually live in; bands and albums even BETTER than this one sat in complete obscurity the same year, but the point remains that this was a damn fine sophomore which capitalized fully on the momentum mustered upon The Legacy, continuing to expand and define the band's sound to an eager audience with enough allowance left over after buying the latest Ozzy and Metallica tapes and tees.

Albeit mild, there is in fact some progression to The New Order. For one, the songs seem a little 'friendlier' than the debut. I'm not saying they were flat-out accessible and likely to gain the band much airplay, but the slightly cleaner mix to the rhythm guitars was evident, and the choruses were simply catchier in terms of their melodic content. Testament had embraced, rather than backed away from the fact that it had a new guitar hero in its ranks, and thus Skolnick's leads are more pronounced and fluid than on The Legacy, with a more consistent use of arpeggios and other melodies that showcased their confidence in his ability. Otherwise, I'm not sure they would have gotten the green light for not one, but two fully instrumental pieces, the spectral and atmospheric "Hypnosis" interlude and the gentler, neoclassical exercises of the 4 minute finale "Musical Death (A Dirge)". The inclusion of the Aerosmith cover ("Nobody's Fault") also made it seem as if the band were throwing a bone to the less aggressive-minded audience; it's a hard and fun take on the original with a nice bite to the guitars, but you could envision that it might make the MTV request shows more than, say, "Eerie Inhabitants". And they did, in fact, shoot a rather lame video for it with the band fucking around in between shots of them performing.

But the gist of the album is pure, unbridled excellence, with a number of songs just as memorable as anything off The Legacy. "Into the Pit" and "Disciples of the Watch" have long been set staples for good reason, as they're both blood stirring pieces, the former succeeded by its title alone to whip any mosh pit into a frenzy, and the latter possessive of one of their better singalong chorus progressions. A lot of the songs ("Eerie Inhabitants", "Disciples of the Watch", "Trial by Fire", etc) build great atmospheres through clean intros and supernatural leads before exploding into their surges of Metallica-fueled rage. The compositions continue to exude that same sense of foreboding as one found on the debut, even if the rhythm guitars are not quite so crushing. Like the cover warns, The New Order leaves me with the impression that I'm living in a fucked world with little hope for salvation, choked out by corruption, pollution, zealotry, globalization, and dogmatic obsession, and these subjects and more are tackled directly through the lyrics.

While it doesn't hit the same polished stride as its own successor, Practice What You Preach, The New Order certainly seems tidier than the first album. The rhythm guitars possess a similar, processed punch while chugging, but they're less muddled. The leads gleam far more, and the clean guitars are also better integrated, which is necessary, since there are more of them. In addition to Skolnick stepping up his game, you also get a larger amount of bass alongside the rhythm tracks, so Greg Christian stands out more. The same goes for Clemente, whose kick drum seems more distinct thanks to the more melodic nature of the writing. Chuck Billy does admittedly sound less raucous and frenzied than on the debut, but he compensates with a stronger range and a lot of tight and memorable lines. Rather than just Xerox riffs from the debut, they also seem to attempt a wider range of variation as they use to set up "The Preacher" or the exotic, far Eastern foundation to the melodies of opener "Eerie Inhabitants".

Though I still listen to The New Order frequently enough, there are a few minor flaws in that the production sounds dated so many years later (like The Legacy); the digitized, effect heavy sound they originally aimed for felt futuristic for its day, but not any more. Not one of Alex Perialas' best, though it was cool to see Raven's Rob 'Wacko' had a hand in this. Also, with the exception of the churning intro riff, I'm not a huge fan of the track "A Day of Reckoning", as the verse riffing seems redundant with ideas they had in other tunes. However, these are about the only limitations to my enjoyment of what is otherwise one of the band's best works. With the exception of the Aerosmith cover, the vision here is incredibly unified, in both vocal and instrumental tunes, and The New Order helped substantiate these Oakland raiders into a potential usurper for the frontrunners in the field. That might not have completely panned out for them in the end, but the fact is that Testament remains after all these years, with a deep well of inspiring material for fans to draw upon, and this sophomore was a willing, quality contributor to that legacy.