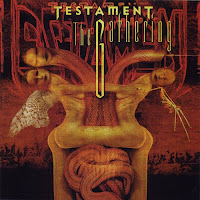 The Gathering is all too aptly named, for it's born of a marshaling or mustering of the band's forces, a strengthening of the levee after it nearly broke through the largely unwelcome and unappreciated Demonic flood with its near complete traversal into the sodden realm of 90s groove metal. Testament returned here to the propulsive, enormous Bay Area thrash stylings that built it, without completely abandoning the heightened aggression level of the two prior albums, and thus there was a great deal of rejoicing upon its arrival. To an extent, this is one of those 'best album evar' enterprises that its own squealing fan base seemed to forget a year or two down the stretch. The ratio of killer to filler is tenuous, but for at least a half dozen songs, it offers the pure, punishing escape of their 80s classics cloaked in an admirable, turn of the century studio brawn.

Amazingly, The Gathering also boasts what must be the highest profile roster in the band's career, with Slayer skinbasher Dave Lombardo sitting in on the drums, bass virtuoso Steve DiGiorgio taking over for Ramirez, and James Murphy returning to the lead guitar position. Essentially, the two Testament loyalists (Billy and Peterson) backed up by extreme metal royalty, and gods do they all sound fucking great here. No offense to Louie Clemente, John Tempesta or Gene Hoglan, but Lombardo's performance on this record is the singular greatest drumming on any Testament release. His mix is far more robust than one might be used to with his Slayer input, but that runs parallel to the style of music here, and he excels at both the accelerated thrashing and breakdowns. The kicks and snares sound superb, the cymbals a little dingier, but he's the best navigator to steer a track like opener "D.N.R. (Do Not Resuscitate)", one of album's strongest, to success. DiGiorgio is remarkably selfless, keeping himself busy without overextending or indulging himself as he often did on the Sadus records.

But I have to hand the M.V.P. to a tie between the guitarists. The riffs Murphy and Peterson mete out in this feel more savage, complex and compelling than the two albums prior. I love how taut the pair are through the rampaging opener, or the more surgical riff progressions in cuts like "Riding the Snake". Billy is also firing on all cylinders, returning to the subtly melodic nature of his earlier career inflection but still weaving in a lot of the guttural growls he honed through the mid-90s, especially on "Legions of the Dead", which delivers pure death/thrash in a way Demonic never could, writhing tremolo riffs carved into the primal, exhausting thrust. The choruses in "D.N.R.", "Down for Life" and both about as catchy as anything off Souls of Black, and this album is overall quite deep in terms of the variation offered, from fun and fancy grooves to faster blitzes style after "Into the Pit", to everything in between. In fact, by all 'technical' accounts, this should be one of my fave thrash records of all time, so balanced, professional and polished in delivery.

The reason it's not: for all its strengths, The Gathering is one of the most easily forgettable Testament efforts, because it's really just an embellishment on the catchier tracks the band was writing during its prime. The riffs, while revitalized, never feel all that fresh or new, only heavier and angrier, and I am all too rarely compelled to listen through this, despite how goddamn clear and present a danger it exudes from the stereo speakers. Billy and Peterson certainly culled exemplary performances form their extended family for this outing, but aside from 3-4 of the individual songs, nothing really stands to memory, like a well directed and filmed sci-fi action film that just has no heart, no theme upon which to clasp the imagination. It goes without saying that this is superior to Demonic in every department, but in retrospect I find myself returning to even Low more often than I do this, which was shocking when I take into account my initial, strong reaction. If anything, at least this 'righted the wrongs' of its predecessor, and got the Californians' back on track, albeit a short-lived one that would kick off the longest hiatus of their history.