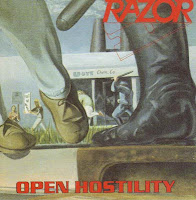 Though it's heavily front-loaded with all the best riffs and most exciting songs, Open Hostility is the best Razor album yet to feature Bob Reid on vocals, gelling for me more than Shotgun Justice did the year prior. In fact, in terms of sheer threat level and fun, I'd put the first four songs here in the ring with just about anything in the Canadians' mustered from 1986 on, including much of Violent Restitution. Unfortunately, there are a few flaws to this album which precluded it from ranking among their best works, not the least of which is the use of the drum machine. I don't often find this to be a problem with extreme metal recordings, where the emphasis is placed more on guitars or atmosphere, but for a thrash metal record in the 80s and 90s, it's tough love.

Perhaps I should qualify that it's not Dave Carlo's 'programming' of the drums here that often removes me from the experience, but their production. There's a particular, mechanical snap to the beats that just feels less authentic and organic than their older albums, and while I can respect the decision by any band to save itself some grief and run with computerized percussion, it still has to sound correct in context. Through Open Hostility, it's a fairly evident distraction, considering that so few bands of this type had ever really attempted it before. Beyond that, the rest of the album's mix also has a few problems, like the vocals being a fraction too low, their range forcing them to cling to the guitars a little more than I like. Considering the sheer grit and hostility inherent to Reid's delivery, I wish they had stood out just a level or so more, that I could soak in the violent subtleties being pitched around with the zany, angry lyrics, which are your typical Razor rallies against social injustice and a corrupt State. The guitars, while powerful, seem a little too arid, and though the bass is fluid, it too often gets lost among the considerable array of riffs Carlo is inundating the listener with.

Otherwise, Open Hostility is raucous and entertaining enough that it doesn't piss all over the Canadians' legacy, and in particular the first 15 minutes are barbaric and steadily engaging, with riffs that make you wanna don a hockey mask and stick and just club the fuck out of everyone in the pit. "In Protest", "Sucker for Punishment" and "Bad Vibrations" are all proof that Razor was running contrary to most of the sad thrashers evolving through the 90s. Rather than succumbing to some tepid groove modernization and catering to the 'alternative' crowd, these guys were becoming even more vicious, expletive jock thrash with lyrical ambitions that any street tough or frat boy could understand. Seriously, this isn't The Black Album or any other kowtowing downgrade to the faceless radio masses in a misguided attempt to remain 'relevant'. This is a fucking riot waiting to happen. Broken glass, screaming women in the streets shielding baby carriages, and Robocop-like law enforcement attempting to suppress the ensuing anarchy. Perhaps to some extent, Razor was such a small blip on the radar that they didn't feel selling out would matter, but I wish more of the mainliners in the speed/thrash field would have had the balls to follow this course.

If you can stomach the drums, and you're a connoisseur for street fighting of this magnitude, this is probably worth the effort to track drown. Carlo is still fast as fuck, even if a lot of the rhythms seem lifted and shifted around from their original patterns on Violent Restitution and Shotgun Justice. The further down the track list you go, the less impressive the riffs become, and the more redundant Reid's gravelly expressions, but in all seriousness, it's the last Razor record in over 20 years now which successfully delivered a bruising you might remember.