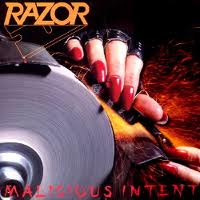 While it's not the best remembered of Razor's backlog, or approaching the cult status of its predecessor Evil Invaders, Malicious Intent does continue to propel the band forward to greater things at a rapid pace, with a sexy cover image nearly as memorable as anything Anvil used. This is more or less of a hybrid of the prior two albums, explosive and accelerated street thrash with some of the dirty molten speed metal of the debut providing a cheap hooker backwash that bleeds a little red light class. There are actually a handful of songs on this which I would place alongside the best of the rest of their career, but ultimately some inconsistency in the riffing and chorus quality knocks it down a couple pegs.

Some don't seem to dig the production of this record nearly so much as the prior output, and in truth there are some estimable differences. The guitars here are crisper and drier, and there's less of an atmospheric flush in the mix of the vocals, drums and leads. It's hands down cleaner than Evil Invaders, but that's not to say its polished to impotence. In fact, the popping intricacies of Carlo's melodic picking are brought more to the forefront on some of the album's most killer cuts like "Rebel Onslaught", where he's using some thrifty tremolo picked sequences interspersed throughout the verses. M-Bro's drums are loud and clapping, but you can pick out the snare and bass drum all too easily, the flooded lowlands of Mike Campagnolo's bass, and of course Sheepdog's garbled, violent prose. I'm a huge fan of Dave's speed metal techniques, lavish and incessant like Venom on amphetamines, balancing chords and single notes patterns efficiently, and can recall years of sitting in the basement learning to play this fast, well before death and black metal entered my life.

Malicious Intent does, to some extent, suffer some degree of monotony due to the similarity in momentum several of the songs take, and at times the note progressions can feel empty and uninteresting, aside from their sheer exercise value. We've heard the same general patterns on a number of their other records, and like Evil Invaders, it feels like a setup for Violent Restitution, which is measure for measure the best use of this band's unbridled testosterone and rage. However, a few of the tunes here are simply spectacular, like "Grindstone" with its intense and unforgettable hyper riffing and opening tremolo sequence which sounds like something Rigor Mortis might have included on their debut. I mentioned "Rebel Onslaught" earlier, and it's bristling with riffs across varied tempos, from the uppity mid-paced NWOBHM speed metal smackdown to the crazy, asphalt burning lead. "Challenge the Eagle" is another winner, its slicing riffs often reminiscent of a poor man's pre-"Thundersteel" taking its liquid lunch out of brown bag, and there's a fraction of charm even to the stupider songs like "K.M.A. (Kiss My Ass)" or the weird intro skit to "Stand Before Kings".

I've actually got the old vinyl for this one, so I've not heard the bonus track "Mosh", but all around I'd say this would be most worth acquiring if you're a diehard for Executioner's Song, Evil Invaders or Violent Restitution. I wouldn't recommend it as the best starting point in their discography, but for the most part it's as bad ass as you could expect from the Canadians, on par with what peers like Anvil and Piledriver were putting out in this era. The lyrics are actually pretty decent here, loads of dystopian and murderous images packed into a compact, clobbering presentation. Workmanlike, frenetic, and fun, Malicious Intent is not oft spoken of like it's next oldest sibling, but it's almost comparable in quality, so pop a beer cap, strap on your bandana, and settle in for a ride to rebellion.