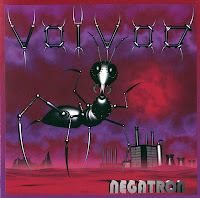 As an outsider looking into the band's career, I find it extremely difficult to fathom why a group with such a consistently brilliant core lineup as Voivod would ever dissemble, barring circumstances beyond its control. And yet, that's what started to happen through the 90s, as first bassist Blacky stepped away from the band post-Angel Rat, and then vocalist Snake, two intrinsic pieces of the perplexing puzzle that manifest such essential listening as Killing Technology and Nothingface. Oh sure, there are real life situations that will catch up to a band of struggling musicians who haven't earned even a fraction of what they deserve in credit and compensation for their artistry, but one might cross his fingers and hope they could still pull it all together. If that one was me...

At any rate, where Voivod managed to pull it together despite the loss of Blacky for The Outer Limits, a damn fine album, this was just not to be the case for its successor, Negatron, a record that in part attempts to disseminate the genius of Dimension Hatröss into a 90s-ready, simplified industrial/thrash formula, and in part seems like a mere 'breaking in' for the new kid in the club: E-Force, aka Eric Forrest. In all fairness, he had a tough job ahead of him, replacing not one but TWO of the band's classic members, so I can, to some extent forgive that he's incapable of completely filling their sizable moonboots. As a vocalist, he brings a bit more fire and acid, a gravelly timbre that is admittedly more aggressive than Snake post-1988, and he also can emit a cleaner, nasal inflection to cover the considerable array of quirky, melodic post-punk vocals that his predecessor excelled at. As a bassist: somewhat less interesting. He embellishes his lines with a solid chunk of distortion flush with the band's post-apocalyptic visions, but many of them just stumble along below Piggy, nowhere near as compelling as Jean-Yves Thériault on, say, Nothingface.

Granted, I don't think E-Force is the primary issue I take with the underwhelming Negatron, as he seems to do the best he can within the context of these songs. Love or hate records like Angel Rat and The Outer Limits (I'm in the former camp), they were imaginative, ambitious expansions of the group's sound, pushing the band beyond expectations while keeping that enigmatic center which defined them increasingly through the 80s. Negatron seems like a partial 180-degree turn to simpler thrash and simpler times, utilizing a lot of mundane palm muted riffing patterns and then glossing them over with Piggy's dissonant, effects-driven aural landscape. The music here, while not by any means awful, just doesn't have that same spark, that same odd enthusiasm. A lot of the hooks are meaty, bouncy and groove-based, feeling somewhat dumbed down from the band's earlier incarnation. I doubt Voivod were heavily influenced by the nu- or groove metal that was dominating heavy radio in this period, but it's hard not to think its ugly surface rubbed off on the Canadians, especially some of the chugging riffs or Aways predisposition towards tribal fills and beats.

Don't get me wrong: this still feels like a Voivod record, and the dour palm muted expressions in a piece like "Project X" do a fair job of opening the mind's window, especially with the impressive atmosphere of Eric's grating vocal being cast out unto the nuclear. You're still getting a lot of that spacey psychedelia through the simple melodies in a piece like "Cosmic Conspiracy", and I actually do favor the post-industrial mix of the record. The drums sound great, the bass is good and ruddy, and Piggy's tones are as exquisitely chosen for this moment of their career as they ever were, but nonetheless, at least half the tracks on the album leave something to desire. Aside from the chorus of "Nanoman", or the tormented verse vocals of "Insect", and a handful of the riffs, so much of this feels as if it were recycled from their 1987-88 period, stripped down and delivered in a more crushing envelope to sate the subdued audience of the 90s, who had been corrupted by the sounds of Korn, Sepultura (Roots era), Machine Head and just wanted grooves to mosh to.

Other hangups include the infantile computer graphics, which in attempting to capture Away's trademark imagery seem a little on the fruity side. Not terrible, but just not as fascinating as anything beforehand. The style and coloration functions better on the following album, Phobos, but here the whole package feels as if they were just struggling to survive and get something happening post-Snake. To Voivod's credit, even at their worst (i.e. this very album), they still never managed to excrete some absolute turd of an album. I'd take Negatron over just about anything the 'Big 4' of thrash released from about 1995-1999, but beyond a few of the atmospheric aesthetics and the decent mix of the record, it still feels like a creative closing of shop. I've never had the heart to turn this into a beer coster, but I revisit it with dwindling frequency as the years roll on.