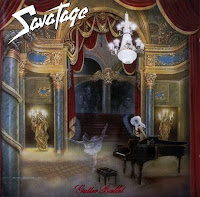 I must say it: attempting to follow up a mighty masterwork like Hall of the Mountain King would be a daunting prospect for even the most practiced composers, so it's a great credit to Savatage that they managed to eke out what has since become my second favorite disc in their catalog. Gutter Ballet is a bigger budget album with slightly more polished tones, and it's a work of greater contrasts than its predecessor, as the band alternates its heavier, metallic elements with an exploration of theatrical, piano-heavy ballads that had been present through parts of Fight with the Rock. Part Queen, part The Who, part "Eye of the Tiger" and part Savatage, to call this album sentimental would be an understatement, but the drama really works thanks to some fantastic songwriting from the Olivas.

There are some who absolutely loathe the rock opera-styled tearjerkers coursing through this album, but where its successor Streets tossed us a lot of really forgettable tunes that ran on together due to their redundancy, cuts like "When the Crowds Are Gone" or "Gutter Ballet" actually feel genuine and stirring. One can just envision the theater after hours, a sad and unsuccessful power metal balladeer stepping onto an empty, dimly lit stage and singing and playing his heart out, while in the alley out back, a street band hears his plight and adds some accompaniment. Of course, this is an aesthetic Savatage would later take too far, quashing many of the harder edged, metallic elements that made the band so distinct in the first place, but on Gutter Ballet it was a welcome departure. The songs spoke to me, and despite the obvious nudge forward in accessibility, it didn't at all feel like a 'sellout', since the band does in fact get heavy. It also feels like a very natural 'extension' from its predecessor, a refined metamorphosis.

Where the band most experiments, like the airy classical/folk guitar interlude "Silk and Steel" or the grand, operatic instrumental "Temptation Relevation", they come up with successful results, catchy tracks that offer us a brief and welcome respite from the heavier compositions. I do feel partial to the thundering step of opener "Of Rage and War", or the swaggering "Hounds", which most reflect the mindset the band was in when they wrote Hall of the Mountain King, but there are other divergent thrills like "She's In Love", the sexy speed metal hearkening back to the Power of the Night aesthetic, only adding a little further hustle to the guitars (love those damned squeals in the setup). At times, Gutter Ballet is admittedly a 'piano album', but let's not forget that this is also Criss Oliva's puppy, and he is all over this fucking thing, with a pristine, clear tone that sends each hook catapulting into the vaults of memory. The bass and drums also stand out on this album more than ever before, with more lower/higher end distinctions. Middleton is pretty amazing.

I honestly worship the first nine songs on this record; after that, the quality dips a fraction with "Summers Rain", another dreary power ballad which just doesn't have the same staying potential. The lurching, angry "Thorazine Shuffle" does a great job of ramping the tension back up, but it's also not as immediate as those heavier cuts before it like "Mentally Yours" or "The Unholy", and I really only love the chorus for its exotic, Eastern desert aesthetic. Once again, the band uses Robert Kinkel for keys, and he does a standup job of providing that extra, atmospheric texture without ever standing in the way of the core instruments. The mix of everything on this album is just smashing, radio-ready and multi-layered so that, with the exception of a few piano/vocal only moments, you're ears are always being siphoned off in numerous directions. The leads are a mixed bag, some of the runs among Criss's finest, others just don't seem so memorable.

Ultimately, Gutter Ballet might not have gifted me that same level of thrill that Hall of the Mountain King manifest, but it was still an impressive record for its time, and also well AHEAD of its time. Of the 52 minutes (including CD bonus "Thorazine Shuffle"), I'd say about 42-44 were brilliant, and it trails off nearer the end, but otherwise I cannot find any fault in it. This is largely fantastic and emotionally resonant music. I only wish Savatage's operatic ambitions ended here, because this record makes its followup feel like an also-ran. After 1989, it felt to me that nearly every album this band was releasing was 'more of the same', even with the revolving door of musicians and the various concepts that they pursued. The last of the essentials, as far as I'm concerned, but if you're entirely turned off by the band's calmer moments, stick to Sirens and Hall of the Mountain King.