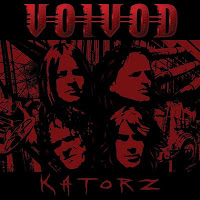 To best describe Katorz would be that it gets everything the eponymous 2003 album got right, only much righter. To a degree, there's a bit of an eerie, sci-fi back pedaling through this than its predecessor, reflective of the band's 1988-1991 phase; but for the most part, it's still the same roots heavy rock/metal/punk hybrid sound they'd started with Jason Newsted in the fold, just the songs are better written, almost completely kicking ass throughout the 45 minute run time. Nowhere will you come up against a cut without some bludgeoning, mesmerizing groove, and Snake's vocal lines are twice as memorable as anything he laid out on the previous album. In fact, Katorz was the best Voivod album to have come out in 15 years (since Angel Rat), and even though it's dropped down a few percentile pegs on my listening board, I still love it through and through.

The production here is nothing fancy, a little less fleshed out than the prior album; the band involved Glen Robinson, who has quite the resume, but it still feels open, raw and honest. The guitars are a little more flooded than on Voivod, the drums more aggressive, the bass slightly less affected but just as potent, and the vocals a nice, thin slice through the meatier rhythmic backdrop. The album does possess some sentimental resilience, since Piggy had tragically passed away almost a full year earlier; the organic, raw tone of the guitars can be attributed to the fact that they wanted to use his prerecorded tracks without much alteration. So, considering the crushing effect this must have had on them all, they did a commendable job of using their own instruments to compliment him without unnecessary tweaks. There aren't exactly a metric ton of quirks to the album, mainly predominant walls of riffing, but a few alien tones made it to the final product, like the intro to "After All", or "No Angel" with its atmospheric sliding. If anything, Katorz gives the listener the impression he/she is sitting in the studio right next to the band as they track it; sincerity defined.

As on its predecessor, the lyrics here are simplistic and more political in nature than a weird trip like Killing Technology or Nothingface, aesthetically fit for the brawling barrage of punk-inflected chords in a piece like opener "The Getaway" or the groovy "Mr. Clean", which is almost like early Clutch or Stone Temple Pilots with its swerving, bold flow of guitars, and not at all in a bad way. Newsted does occasionally engage the fuzz ("Silly Clones"), and rather than simply rock the spot, the guitars often create these dense walls of force that envelop the wrestler in Piggy's strange, atonal composition. That said, this is not so complex as Nothingface or Dimension Hatröss in scope. There's a dark atmosphere lurking in most of the tracks, darker at least than albums like Angel Rat or Voivod, but overall very few traces of the pure sci-fi thrash that the band had developed at their peak, and I can say that those who loathed the 2003 album are not likely to dive deep into this, despite its more swollen, textured sound.

Personally, I fucking adored this, and it evokes a lot more testosterone with the mightier numbers like "The X-Stream" and "The Getaway" than anything from its predecessor like "Gasmask Revival". Pure heavy metal riffing patterns soaked in a road ready attitude that meshes well with the self-reflective in most of the lyrics; but with that added, 'secret ingredient' in the guitars and vocals that always made this band stand out from the crowd, even as early as their primordial War and Pain record. Though Piggy's songs were also involved in the following album, Infini, Katorz is more of a proper sendoff to the extent that it never feels like anyone is fleecing his corpse for ideas. A workmanlike, fully memorable swansong for one of the greatest and most unsung guitar gods in all hard music, everywhere, for all time. As I'm positive there were extraterrestrials also listening to and loving Voivod, I like to dream that they've somehow, using higher technology, preserved the guy's conscience, and that he's out there wrecking their worlds just as much as he rocked this one.