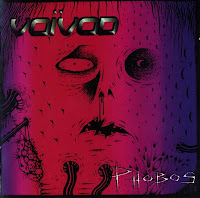 It's not a massive aesthetic departure from Negatron, but Phobos is clearly the better of the two E-Force fronted Voivod records, with an even more obscure, grimy finish to the vocals, and the most unified concept coursing through it since Nothingface. Still seems to be a bit of a 90s alt rock infection here, especially with the minimalist song titles and the constantly grooving drums, but in general I enjoyed the pacing of this music and it's slightly less accessible overall polish. The major influence seems once more to be Dimension Hatröss, since it lacks the elegance and strong melodic hooks of the 1989-1993 works, but despite the myriad of simplistic grooves and familiar riffs here, Phobos is a place of paranoid dystopian depression in which you can lose yourself.

Naturally, I enjoy the more experimental nature of the music, including all the ambiance and feedback woven through the intros and interludes, and often the central songs themselves, to create a freakish vortex of both overcast metropolitan smog and subterranean claustrophobia. Vocal effects, echoing guitars and distant, filthy distorted lyrical lines are threaded through pieces like the title track or "The Tower", and I always felt like I was witnessing the birth of some bio-mechanical intelligence. Our new overlords have arrived! The riffs are exceedingly simple, often just vacuous open notes being wrought over the predictable thrash patterns, or 2-3 discordant chords, but they never seem to distract you from the record's negative, thematic outlook, and for a full hour, Phobos never breaks character, at least until the cover of King Crimson's "21st Century Schizoid Man", which, while not as effective as their tripper Pink Floyd covers ("Astronomy Domine" and "The Nile Song"), seems a natural fit.

The atmosphere is comparable with Negatron, but ever so slightly grimier, as if they wanted to keep the flow of the record loose and adaptable rather than the bone wrecking crunch of something like "Insect". The bass lines, while not up to a Blacky level of personality, are more fluid and functional than the prior album, flooded with similar distortion but standing further apart from Piggy's guitars. Some of the tracks here hit so heavily that they seem like an extraterrestrial doom, especially "Neutrino" with its warlike drumming and effects snapping on as it thunders into Eric's vocal lines. A few of the tunes seem a bit lengthy on the surface, 7-8 minutes, but often some of that extra space consists of ambiance, pulsing electronics ("Bacteria") or other doses of irradiated experimentation that all seem to function in the overall architecture.

What Phobos isn't, is 'catchy'. They don't often go for the bigger, melodic chorus hooks here that we even heard a few times through Negatron, and rarely does the composition escape its cybernetic gloom. While nearly every earlier Voivod album had a number of 'singles' you could separate from the rest to impress your ignorant friends and family who were negligent of the Canadians' genius, Phobos must be experienced in its entirety to be fully appreciated (though you could clip off the cover at the end). While I was all too happy to have Snake back in line for the band's following album, the eponymous 2003 record with Jason Newsted, I must admit that this album showed some promising development with the three-piece lineup, and it's possible that E-Force's continued contributions could have yielded some fruit worth chewing. With the exception of Negatron, I wouldn't place this above any of the earlier or later albums in terms of quality, but it's still good enough that I'll occasionally come back around to it.