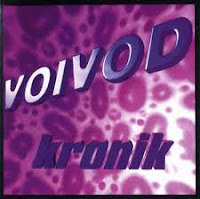 Kronik was a fan package released the year following Phobos, which I assume was meant to whet the audience's appetite for fresh and alternate material while they wrote and recorded some hypothetical third studio album with Eric Forrest. As it would turn out, this record actually contains the final creative input for E-Force's time with the band, and though Phobos itself had been an undeniable step above Negatron in terms of quality, I cannot say I was all that put out by the decision to bring Snake back into the band, regardless of whatever bad blood it might have created between the Canadians and Forrest. That said, Kronik was not exactly a case of ending on a high note...

There are three 'sections' to this release, the first of which is comprised of a trio of remixed songs from the recent studio albums. "Forlorn" is reduced partly to a hack, bouncy industrial metal tune, but as it proceeds you get some more depth with the clamorous percussion and choppier vocal mix. That said, it's a fucking utter mess, especially when it breaks into a cheesy hip hop beat that wouldn't have been cool if DJ Shadow used it the same year. "Nanoman" goes for more of a Prong approach, only more mechanized, with jungle drum patterns woven under the distorted vocals of Forrest, and lots of deep jeep bass interspersed along the far more difficult to make out guitars. "Mercury" is almost total jungle, and though I realize this style and its happy hardcore variant were pretty big in Canada during the 90s (I myself even enjoyed a bit of it), it sounds even less well plotted than anything on Fear Factory's similar turd Remanufacture.

After this comes the only chunk of Kronik that actually might matter to anyone, the unreleased material, which followed in a similar vein to Phobos' brute, spacey aesthetics. Really simplistic chord grooves that are dominated by dissonant counter-riffs, while Forrest's piercing, alien rasp howls out over the booming bass. Admittedly, "Erosion" and "Vortex" aren't a bad pair of tunes, nor is "Drift", though I had the impression most of these were mere variants on riffing progressions the band had already used for the past two albums, but if you're into that crushing Dimension Hatross type of guitar pattern, these provide a more muscular version that functions well enough above Away's pacing, and there are a few atmospheric and moody moments in the bridges that deliver some whacky, extradimensional thrills. In fact, if they'd just released these four tunes as an EP, I'd have a much higher opinion of them.

Lastly, the are a few live offerings here, chunky and atmospheric and all around more impressive sounding here than on the later Voivod Lives (which was recorded in '96), but three of the four tunes are also found on that album. The only bit of interest might be Eric Forrest's performance of Floyd's "Astronomy Domine", but while the guitars sound good here, E-Force simply does not have that same presence as Snake did. Still, this sounds a lot closer to how the band came off when I saw them in Northampton in the late 90s as a trio, and they're not as much of a misstep as the dumb remixes. In the end, Kronik is only serviceable to fans with a hard-on for Negatron and Phobos, all 30 of them, and even then I'm referring only to the unreleased studio tunes, which aren't so shabby. I believe I bought this for $1 at a used record store, and I wouldn't value it much beyond that.