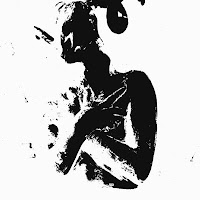 The combination of traditional heavy metal riffing and its moderate levels of aggression with the advent of extreme metal vocals is hardly a novelty by this point. Entire sub-genres have blossomed to fuse the two, ever since Scandinavian cults like Morningstar first risked the hybrid, and thus we've seen a lot of black/heavy or black/thrash metal over the past 10-15 years. That said, Arkhamin Kirjasto, a Finnish duo of multi- instrumentalists featuring the prolific Jussi Lehtisalo (from Pharaoh Overlord, Krypt Axeripper and others), tackle this approach vector with an immense level of atmosphere and variation that devours the listener into this universe of alternate nostalgia where pure metal riffing straight out the 80s is dowsed in guttural manliness.

Samae Koskinen's vocals remind me of Taneli Jarva (The Black League, ex-Sentenced), with that broad, charismatic edge that sacrifices a bit of growling incoherence for robust fulfillment, and even though the meter of the lyrics is not always that inspired interesting over the riff patterns, it still adheres to the lighter and brighter substance of the guitars, and the other atmospheric tweaks through the record. For instance, in the opener "The Cult of No Return", you've got guitars used as a scintillating, ambient intro. Cleaner patterns erupt through the song alongside the meatier rhythm guitar and the wailing dual melodies deeper in, while there's a lot of airy reverb to the vocals. The composition is pretty pure, driving heavy metal you would recognize from bands like Maiden, Judas Priest, Thor, and Manowar in their prime, not so intricate or well-structured as Sentenced's Amok (another album which attempted something similar in the 90s), but still pretty fun despite the level of familiarity a listener is likely to experience with the note progressions.

However, affixed to the raw, distorted bass-lines and the more punkish, grisly force meted out in tracks like "Thousand Snakes" or the near-Nihilist crunch of "Golem Made of Flesh", you've got a collection of quite disparate elements that work remarkably well in context. Beyond this, Torches Ablaze keeps the content even more varied, with moodier, atmospheric tracks like "Sea of Madness" which feature whispered, cleaner vocals and tremolo melodies; or the closer "When the Light is Dead and Gone", which is absolutely fucking magnificent with its soaring, multi-tiered harmonies, spacy intersections and thundering rock beats. The Finns are not simply satisfied with lifting and paraphrasing patterns of classic records and then snarling over them (something many, many trending bands today are guilty of); instead, they add and amplify the nostalgia through layers of drama and texture that end up sounding quite original. Torches Ablaze isn't a perfect album, and not all the tracks are equally catchy or interesting, but I'd recommend it to anyone who wanted melodic death metal with a difference, or projects like Norway's I who possess a comparable, resonant and epic nature.