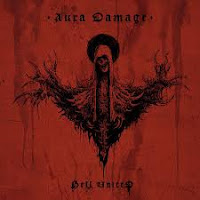 Hell United's 2008 debut HornoKracy was a total surprise for me when I first experienced it. I had never heard the band prior to that, but here was this visceral, bloodcurdling burst of black metal so fierce that it seemed to ignite your eardrums, burning you long after the music had passed. Along with several other acts in this scene, like Thunderbolt, Infernal War, Azarath or Stillborn (the last of which shares some members with this very band), there was this relentless punishment inherent in that album which embraced both its accelerated, flesh shearing outbreaks and slower, crushing sequences, and I've found myself going back to it numerous times in ensuing years when in a fix for unadulterated aggression, though I regret that I missed out on the band's intermittent EPs.

With Aura Damage, Hell United retain a lot of the core characteristics of the debut, but they've fleshed them out into a more prominent death metal aesthetic. Blasting and intense tremolo riff patterns are still prevalent in the composition, but there's this more charnel, grinding edge to the guitar tone that feels like they're rapidly tilling graveyard dirt and all the festered scraps of flesh buried within. The vocals here skew a bit more towards a guttural timbre than a rasp (though both styles have manifest on both albums). The riffs seem to run the gamut from a unswerving old school death hostility ("Apostle of Plague") to a convocation of gnarled, blackened thrash guitars as in "Aura Damage" itself which twist into sporadic bursts of lead or unnerving melodies that seem to shiver up the listener's spine. Like the latest Stillborn record, you get this constant hint of atonality, a slight stream of dissonance bled along the axis of the meatier guitar rhythms. Aura Damage is as fresh as a ripe corpse, its bones not yet stale beneath the earth; where HornoKracy had a more airy atmosphere about it due in part to the vocals.

Still, though this is an evolution, it's not such a huge departure as 1349's Revelation of the Black Flame, or Emptiness's Error, two albums that abandoned a more complex and structured extreme metal sound for a more atmospheric, but less appealing direction/aesthetic. Aura Damage is first and foremost brutal. Simpler atmospheric tints, like the intro to "Hinterland" or the drudging pacing of closer "Totality of I" always seem to go somewhere more important. In terms of the riffing involved, I believe I retain a slight preference for the first album's feral ferocity, but this is unquestionably a darker and moodier outlet which functions on several levels, both in its unbridled, churning force and ability to leave haunting scars upon the listener through eerier, sparse strikes on the higher strings. Never extremely catchy, but solid and dynamic, the 35 minute run time ensuring that there is no room for a listener to become bored. Despite the slight transformation in technique, Hell United still takes no prisoners, and Aura Damage still represents unsafe, volatile expression.