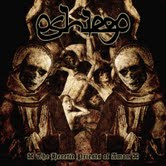 The Heretic Priests of Amon is the followup to last year's Woe to the Conquered, the full-length debut of Singapore's Oshiego. Rather than dive headfirst into another complete album, the group has decided to ply the waters with a single-length release, so the reins here are held tight at three songs and under 15 minutes. That said, this is unquestionably a positive evolution for the band. Stylistically it resonates with the prior material, an urban mesh of death and thrash metal ingredients with a mildly Eastern flair to the note progressions, but a few of the nagging discrepancies and jagged edges of the 2011 album have been smoothed over, and the result is a more entertaining and consistent set of tunes that are fit for violent consumption.

Love the huge, chunky guitar tone on this thing, it lends a lot of power to even the simplest of riffing patterns, and in particular it sounds amazing on the grinding eruptions in the verses of "Blade of the Conqueror". The higher pitched snarled vocals are still present, but the gutturals reign supreme here, and that's a good thing, because this guy's voice makes me wanna punch the fucking newspaper boy. Broad, fulfilling, and carries very well over the busier lattice of riffing. Lots of dynamics here too, from brief blasts to mid-paced clinical thrashers, tremolo picked melodies, well-fashioned lead sequences, you name it. Most importantly, the breakdowns throughout this material are far better plotted than those of Woe to the Conquered: Oshiego is always threading some slightly exotic sense of melody through or above the mosh-chop. As someone with a worldly, adventurous taste in music, but who has largely remained confined to North America in his travels (my own fault), I really appreciate getting a sense of a band's place in this world, especially a place far away from mine. Oshiego could certainly spice up this aspect of their sound further, but as it stands, their sense for explosive thrashing is excellent.

Everything is on point here, from the enthusiastic drumming to the ample bass tone (which even gets a bit funky in "Legions of the Nemesis"). It's hardly the most polished production you're like to hear, but instead fresh and bludgeoning. Try and imagine aggressive 80s thrash from bands like Sepultura, Mortal Sin and Demolition Hammer, but with vocal cues taken from old death metal luminaries like Benton, Willetts or van Drunen. The use of occasional melodic death elements also reminds me of another Asian titan, the great Intestine Baalism, who had a lot going for them in their decision to eschew strict genre boundaries. The Heretic Priests of Amon might not be so brilliantly riffy as An Anatomy of Beast or Banquet in the Darkness, and it often feels a little cluttered as they lay out one smackdown after the next, but it scratches a similar itch. Nothing but honesty here, guys who love metal playing their hearts out, never forgetting the golden rule of these genres: you're only as good as your riffs. Make them count, and make them hurt. Oshiego does both, and we're all the richer for it.