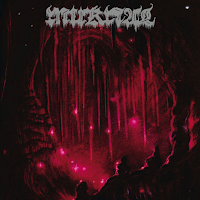 The mysterious Muknal came to my attention earlier this year, when a number of readers recommended the trio's eponymous demo of freakish, atmospheric black/death metal. I had listened to a few of the tracks and enjoyed what I heard; but until now I hadn't acquired a copy for review. Thanks to Hell's Headbangers, who have wisely now snapped up the demo as a 12" release, I'm sure I won't be the only individual getting a more formal inauguration into the group's sound. Lush, beautiful and enigmatic, the cover of this thing alone is enough to inspire attention, with the perfect central logo placement and the gleams of light among the yawning, cavernous depths which beckon out at us.

These same aesthetics translate directly into the music, which is loaded with voluptuous, distorted tremolo riffing passages that resonate over both blasted beats and steadier pacing, all of which seems contained in a subterranean space, the primal aggression bouncing off the walls, stalagmites and stalactites. The drums do seem to be buried beneath the raucous guitar tone, constant sliding, spectral echoes and hovering funereal synthesizers that drift out over the procession, but in the faster pieces like "Cruciation" and the crashing conflagration of "Eidolon", you can tell they're busy as hell as they're blasting along the substrate. Perhaps most impressive are the disgusting vocals, which occasionally veer towards a black metal rasp, but are slightly more effective when they explore a more ghoulish guttural register that barks and mocks out over the underground landscape. There is some variation through the tracks, with the band eking out a death/doom passage in "Rotten Genesis", but I did feel that overall, the band skewed towards their more accelerated histrionics, and this is primarily where they excel.

Imagine what might have happened if a subspecies of humanity, long locked away from the light of the surface world, had found a handful of Incantation, Blasphemy, Autopsy and Angelcorpse tapes dropped down a well. Next envision if these cavern dwellers developed the technology to generate electricity or batteries, and audio equipment necessary to play those tapes. Then they began to listen and worship them as if they were some form of aural bible, and the 'priests' formed a band themselves with newly invented instruments, to continue meting out this sacred diatribe to future generations. If you've ever wanted to experience the product of such parallel evolution in extreme metal, then I present to you: Muknal. Not all the riffs cling to you, and several of the transitions here feel cluttered and clumsy, but nonetheless there is something roiling, dissonant, hypnotic and threatening about the material on this demo that makes it well worth while for ardent supporters of old school black, death and war metal to feast their unfettered ears upon, and be thankful for the sun and stars they are allowed to experience each day and night.