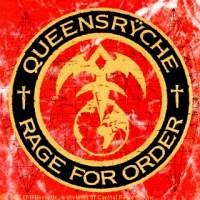 Rage for Order was about the time that Queensrÿche really started to earn that 'progressive metal' tag that they've worn for decades, since it shows a clear stretch towards more experimentation and rock structures than either of the earlier releases. That's not to posit that the band had suddenly become 'brainy' or anything, or started to sound like a group of Yes acolytes (though I hear a good deal of Rush in cuts like "I Dream in Infrared"), but clearly there was a difference in the songwriting here than on the eponymous EP or The Warning, where emphasis on speed and flashiness took a back seat to the script of functional riffs, clarity in production and further highlight Geoff Tate's impressive prowess as a vocal force fit to rival the best in the entire business, if not entirely dominate them...

Contrary to The Warning or its brilliant successor Operation: Mindcrime, Rage for Order is not so much a unified, narrative concept album as it is an exploration of certain themes, one of which seems to be the technological awakening of civilization and the onset of the Information Age. Titles like "I Dream in Infrared", "Screaming In Digital" and "Surgical Strike" are all obvious hints, but what I appreciate is how the lyrics explore these ideas from a more personal standpoint. This isn't the Terminator saga, or the Matrix trilogy, frightening us with cautionary tales of machine rebellion, but more of a direct line into a believable future as it splays open like a blossoming flower, and the lyrics to tracks like "Screaming in Digital" and "Neue Regel" seem to enforce this theme. That said, it's still consistent enough in its message that I doubt the term 'concept album' entirely evades it. What's most interesting is just how 'relevant' its conversations remain today, despite the fact that the level of technology we're dealing with has grown by leaps and bounds from guided missile arrays, Star Wars and personal computers to handheld devices, cloud tech and other advancements.

But my favorite elements of this record have always been its smooth contours, simplistic and creative rhythms organized into more complex textures, and the fact that it's a wonderful transition into an album that remains one of my favorites of all time in the metal genre. The leads and choruses here might not be quite so mercilessly sticky as those of Operation: Mindcrime, the rhythm guitars not quite so workmanlike and airy sounding, but I don't think there's any argument that the next album was more or less a better reworking of the compositional level placed in this one. In fact, tunes like "Neue Regel", "London" and the cover of Lisa Dalbello's "Gonna Get Close to You" place Rage for Order into a near pop environment. The guitars aren't heavily distorted, the drumming is super polished to a Phil Collins level, there are a lot of dated sounding synthesizers coursing across its soundscape, and in several cases the arrangements of the vocals prove the only overpowering aspect of its creation.

Tate is the master of this work, reaching new heights of perfection in the chorus of "Walk in the Shadows" or "The Killing Words", and they did a great job of multi tracking him to create this soothing atmosphere that creates a jubilant explosion within the ears. Though most of the riffing patterns are actually quite minimal if you break them down, they never feel that way thanks to the weight of everything else happening, and I love how DeGarmo and Wilton occasional use them almost like slices of melodic percussion knifing through a piece like "Screaming in Digital". Queensrÿche fully embraced its progressive tendencies here, and unlike another LP of the same year, Judas Priest's Turbo, they pulled off all the keys and mechanistic leanings of their experimentation with far more seriousness. I might still enjoy that other album for its cheese factor, but Rage for Order is never so tongue in cheek, even where it most distances itself from the raucous metallic roots of the debut EP.

Though I like the production of this album for the time it was released, I definitely feel that this is the most 'dated' sounding of all the Queensrÿche works of the 80s, and that's in part due to the general thinness of the guitar tone and its poppy permutations. In addition, some of the more dramatic tracks like "I Will Remember" have never ranked among my favorites, though they once again serve as forebears to the great commercial success the band would see with Empire. The clean guitars through the album definitely feel similar to how they were used in other USPM acts of the time like Fifth Angel's debut, but the note progressions are not all that memorable and leave too much up to Tate's voice alone. 1986 was also a year in which more aggressive albums like Reign in Blood, Peace Sells..., Zombie Attack, Darkness Descends and Master of Puppets were ruling the roost of my attention span, and despite the anger implied in its title, Rage for Order is admittedly quite wimpy by comparison, so it didn't stand out all that much in the crowd.

That aside, though, this was a clear step forward into a more creative territory, and one that I've continued to appreciate down through the years. Queensrÿche was far from a 'first' band in either the heavy metal or progressive rock spectra, but their ideas always felt slightly ahead of the game, polished and accessible but still willing to challenge a listener's imagination and expectations. Rage for Order was never as rewarding for me as the following album which perfects its fundamentals, but it was nonetheless compelling and distinctive among all the thrash, speed and later NWOBHM I was enamored with at the time.