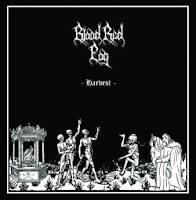 10+ minute tracks can be a difficult component to pull off when you're pushing such a simple sound as Blood Red Fog, and yet the Finns do so with honors, committing a range of riffing textures into each of the four tracks on this sophomore album that manage to keep the listener invested into both its fell, majestic mid-paced paeans and the chilling, grave born mists evoked through their suicidal vocal lunacy and haunted resonance of the more minimal guitar sequences. Immediate comparisons could be made towards several of the earlier Horna records, a band which also once used similar sized song structures, and the vocals and production might occasional evince parallels to the tortured antiquities of Burzum or Weakling, but in truth this is a sound that will most readily capture the attention of fans into other Finnish underground acts like Vitsaus, Förgjord, Behexen, Charnel Winds,  Mortualia and Pantheon of Blood, a few of which share members with Blood Red Fog.

As I've been listening through this album, I kept feeling the impression of some risen ghoul as it conjured up memories of its own glories and failures in life, while the cemetery it lurks in is enveloped in cold, cloying mists that themselves evoked phantoms of the dirt-deep denizens. The duration of the tracks contributes to this broad, mournful environment, and thus the album is quite solemn and melancholic, with only a few bursts of warmth created through the faster paced, charging chord sequences (as in "Harvest" itself around the mid point). In general, the textures of the chords feel familiar, they've been used throughout the years in similar configurations through the European underground, but I very much enjoyed the very frost-tinted fluidity of the production here that really dominates the mix. Meanwhile, the vocals create these eerie, blistering winds of regret and suffering which echo out among the marsh-like, graven, roiling terrain of the guitars, truly effective in the slower moments wrought through pieces like "The Prison" in its opening half. There are also some deep, clean vocals throughout the disc which rattle a listener's bones, offering some variety from the sheer desolation of the harsher inflection. The production of the drums is also balanced, natural and gives the album a live appeal, seamlessly transferred from the moderate blasting beats to the slower, steadied percussion.

Harvest is incredibly consistent, but is not a huge level of variety happening in the composition; meaning that to best experience this, you'll want to set aside 44 minutes in which you are prepared to experience its particular emotional strains. I wouldn't necessarily dub it 'depressive' black metal, but certainly there is some crossover appeal to that sect. The lyrics create lush, simple and immortal imagery of death and nature that match well to the musical atmosphere, with a few hints of the occult (as with the final track, "The Abyss"). One of the album's greatest strengths lies in its authenticity. There isn't much progression or innovation involved in the construction of the music, but it's well tuned towards the lightless specters that inspired it, and its introspective nature makes it excellent for pondering the veil of oblivion. It's not particularly sinister or evil, as you might expect from its field (and certainly some of the band's associates and contemporaries), but the sheer sorrows strewn throughout its four tracks are not to be denied. A surge of shamanistic sadness.

Posted by autothrall at 8:36 AM