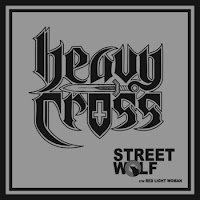 Heavy Cross is yet another project involving the mysterious Satanic Tyrant Werewolf, who most recognize from Satanic Warmaster, but has also played in a large number of other black metal and old metal inspired projects, one of which, Armour is not entirely unlike this EP in execution. But while that outlet attempts to capture the wilder side of 80s metal, with a mildly US vibe, the Street Wolf EP is essentially a straight shot of NWOBHM style riffing and everyman vocals, with hints of the old Scandinavian heavy metal like Oz in there. The popularity of these retro bands is tenuous and likely doomed in the long run, since no matter how hard they try they seem pale shadows of their influences, but who can fault them for having a good time?

And that is precisely what Street Wolf EP guns for, nothing so much ambitious or distinct, but an attempt to kick in the door to a club and rock out over the evermore distant 80s haze of cigarettes, hairspray, leather and chain. The riffs here brought me reminiscence for early Judas Priest more than anything, but I did like the adequate crunch to the guitar tone, and even if they're the sort of riffs one feels like he/she could concoct in a matter of minutes, they've always been and remain fundamentals for this type of band. The melodies are honestly a bit thin, and once again entirely too simple, but they give it that elder British glaze sufficiently; and it was interesting to hear them break into a moodier, acoustic/atmospheric sequence in the title track. Rather than attempting to shriek or scream, the vocalist stays within his limits, which in this case is a mid range. I don't naturally mind the sincerity of this style, but I will say that it does little to amplify or excite when it comes time to howl out the chorus to "Street Wolf", even with the backups; and this, for me, was a critical part of metal in the 80s which I'm missing here to an extent.

Otherwise, the drums and bass are functional, and the 7" is produced with its target decade in mind, sans any possible gimmicks. Of the two tunes, "Street Wolf" felt slightly more turbocharged and 'epic' than its partner, "Red Light Woman", a stock mid-paced Saxon/Priest rocker, but I wouldn't say I favored the riffs in one to the other, both are admittedly somewhat average. Compared against more intense forays into the excesses of the past, like Midnight, Enforcer or Armour, these Finns really have their work cut out for them, and the songwriting needs a bit of refinement, a boost in volatility. However, I dig the group's aim here. The logo and the style they're adopting are cool enough. Even though they aren't reaching for one of the higher branches on the tree of nostalgia, Heavy Cross is certainly not 'bad' in the slightest, and if you want a pair of pretty mellow heavy metal tracks to provoke remembrance of an age in which you may or may not have even been alive, then this will at least suffice.