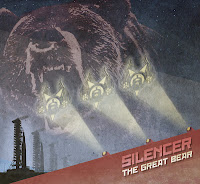 Not to be mistaken for the suicidal Swedish black metal act of the same name, this Silencer has instead been kicking about the Colorado scene for well over a decade, sharpening and polishing its sound into an aggressive fusion of thrash and power, with smaller hints of groove and death metal for good measure. I've heard a few samplings of their past albums Death of Awe and Divisions, but never looked further into their material, an ignorance that The Great Bear will hopefully shake from not only myself, but many others. I wouldn't say that I was entirely amazed with this music, yet I can promise you that to experience Silencer is to experience something DIFFERENT, and that is more than I can say for the lion's share of new music I'm often sent for analysis.

Most impressive is the concept behind The Great Bear, which deals with the Soviet/US space rivalry in the 1950s and 60s, not necessarily a factual reenactment but more of a hypothetical alternative history. No, it's not about ursus arctos horribilis mauling nature enthusiasts in Alaska, but we can't win 'em all. Silencer has to my knowledge given us a 'first' here, and more than that, the music has the remarkable ability to actually transport the audience into the setting of its subject matter. Atmospheric, blazing and dynamic, the tracks here range from pure speed/heavy metal inflected semi-thrashers like "I Am Thunder!" with faster paced, intricate grooving licks reminiscent of bands like Megadeth, to storming, simpler walls of chords. The leads are endowed with a lot of bluesy, wild abandon, wah-wahs and such that remind me of guitar heroes like Slash if they were actually performing music with balls, and the band will occasionally even bust out a series of tremolo like, aggressive notes in tunes like "Great Bear" amidst the steadier trade metal riffs. There are even a handful of more grandiose, atmospheric overtures in the intro "Sacred War" or "Orders/Noble Sacrifice" which teeter along the precipice of glorious doom.

In other words, The Great Bear is not the easiest to pin down in terms of an exact style, but the Coloradans handle all of these components with a seasoned maturity, and none ever feel quite out of place. As to the quality of the riffing, there were highs and lows, places where the note progressions were kept harried and interesting, and others where they'd settle into a stock pattern or groove that never went anywhere exciting. Clearly a lot of work went into putting this together, and the album as a whole flows well through its brief 30 minute play-length (on the short side for such a great concept), but broken down into individual riffs it isn't quite so consistent. The drums sound sleek, and the bass is like an amplified Steve Harris in spots (intro to the song "Light", for example). The vocals have a lot of grime and gravity to them, inspired not only by the deeper end power metal growlers, but by vocalists like James Hetfield and Chuck Billy who have that natural grit to their timbres, or perhaps even the original Meliah Rage vocalist Mike Munro, and they fit well to the rather ominous atmosphere of the music, even if it's not the darkest or most despairing.

Seems to me that Silencer could find itself a widespread audience, whether amongst the usual US prog and power crowds who don't mind a more serious, aggressive subtext to the style (Savatage, for example). Or maybe fans of crushing Swedish stuff like Tad Morose or Morgana LeFay, or a less intense variation on thrash (like Testament's excellent and unsung offering The Ritual). The Great Bear is both modern and traditional, it's a work of depth, and it scratches a lot of itches. Beyond the concept, I cannot say that I was entirely blown over, largely because the choruses didn't exactly call out to me, and the riffs were about a 50/50 mesh of brilliance and banality, but make no mistake about it: Silencer is the sort of band that needs encouragement, because it's an act like this that will be capable of putting out one of those records we all wax nostalgic about 20 years later. This is not THAT record, to be sure, but I hear nothing but capability and genuine inspiration here, so we'd all better pay attention.