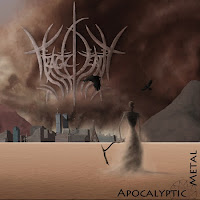 Tragic Death is the second group I've heard lately from the Madison, Wisconsin area, and like their neighbors Warseid, they approach the extreme metal aesthetic with a lot of ambition, albeit with a different set of rules. Their self-branded 'Apocalyptic Metal' style, which also serves as the title for this self-released debut, is a weighty amalgamation of the death, thrash and black genres, with the added implementation of some symphonic overtures via keyboards. While I'm not sure the invention of a new sub-genre is warranted to truly define this, since there have been scores if not hundreds of other bands down through the years to merge all these qualities, it's at least admirable that the band desires to celebrate and embrace the ambiguity that this fusion creates.

The trio creates a very bass heavy sound here, with a lot of low end, charging and pummeling riffs that seem like the bastard offspring of Amon Amarth's glorious Viking death (post-The Avenger) and Rotting Christ's propensity for mid-paced, brazen melodies (circa Triarchy of the Lost Lovers or Thy Mighty Contract), both of whom number among their influences. The driving double bass patterns serve as a concrete support for much of the forceful, deep chugging, but rather than just bludgeon the listener for moments on end they also break out a lot of melodic thrash riffs. The vocals range from a bloodied, Sakis Tolis rasp to a deeper, ominous guttural, and even the bass lines and clean guitars (as in "The Christian Disease" bridge) have a moribund sense about them. On the other hand, they'll often dispense with the gloomier aspects for this brighter, atmospheric edge created by the keys ("Empty Whore"), and I found myself slightly more attracted to this side of their sound, since there was more going on and the material retained the sweeping bombast mandatory to such a feat.

Pieces like "Leviathan" also reveal a tendency towards that more melodic, Swedish side of death metal made prevalent through Dissection, Dark Tranquillity, Hypocrisy or In Flames during the earlier through mid 90s, and here the pacing of the guitars expands to include vast swaths of tremolo picking harmonies, which make for a nice countermeasure towards the largely slower slugfest that runs through many of the songs. Unfortunately, at the same time it often creates the impression that the band might have bitten off mildly more than they can chew. Of the near hour of material, only a handful of the guitar riffs really stick on the memory, primarily as they hail from such affluent and familiar influences; and for such an early record in the band's development, some of this staggering amount of material have been sacrificed for a narrower focus on the rest. For instance, the ruddy death/thrashing intro "Khloros" with the Barack Obama samples could have been clipped, its better riffs mixed elsewhere with vocals; the outro "Promethean Skies" and its moody, dark classical guitars are more than enough instrumental for this album.

Elsewhere, there were other minor aesthetic hiccups. The cover art with logo felt a bit cheap and cluttered, especially the album title placement and the bird flying over the moniker. The production, while clear enough that you can make out all the vocals and instrumental lines, is still a bit muffled and underpolished. For instance, there are a few melodies in tracks like "Grave Years Past" that get drowned out by the vocals and rhythm track, and brighter tones overall would seem better suited to the majestic phrases where the guitars and keys clash. Despite these issues, though, Apocalyptic Metal is not a bad record, especially for anyone enamored to the black and death metal rosters of Nuclear Blast and Century Media in the 90s (before they succumbed to the tide of trendy metalcore garbage and 'rock stardom'). Tragic Death came up listening to a lot of good music, and they don't at all do a poor job of fusing it all together into something of their own. Not a lot of bands in the States sound quite like this, and with a little more work they may damn well hone their considerable weaponry to a fine, cutting edge.