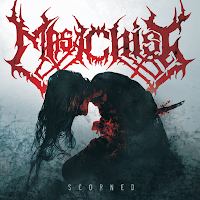 It is my firm belief that Polish infants are raised in incubators with which they are fed audio samples of Suffocation, Morbid Angel, Deicide, Cryptopsy, and their own national 'A-listers' Vader and Behemoth, alongside other forms of nutrition. How else could one explain how deep and wide the death metal scene over there has become, with even third and fourth tier bands show such a firm understanding of the genre's composition, married to their individual instrumental proficiencies and an incessant array of brutal chops and concepts that continually to floor me year in, year out? Masachist is another of the country's myriad living weapons, and while their sophomore Scorned might not seem like the most striking or unique in the field, it's unarguably a balanced, dynamic, atmospheric and effective dose of punishment from another act of near limitless capacity.

As we experience straightaway with "Drilling the Nerves", Masachist is well practiced at filling out a groove with mechanical exaction. Crawling, spider-like palm muted patterns are set to an ominous, low backing choir synthesizer while the garbled guttural vocals punctuate the nihilistic momentum. I admired the low tuned tone of the chugging here, you can really feel it wrenching your last few meals from your intestines, to the point that this might even please the 'slam' sect of the death metal fandom, though I didn't feel the Poles' influence was drawn so much from hardcore breakdowns as caustic, mechanistic concepts. However, while the band excels in this slower, surefooted tempo (also in "Straight and Narrow Path"), they also offer up a lot of tense, unbridled, dissonant bursts of acceleration that draw more on the inspiration of a Morbid Angel or Immolation ("Liberation" and "The Process of Elimination"), perhaps even a bit of Pestilence riff structures circa Testimony of the Ancients ("Opposing Normality"). The final 10 minutes of the album is devoted more to experimentation, with the abrasive ambiance of "Liberation Part II" morphing into the massive, lethargic grooves of "Inner Void" which evoked thoughts of a more muscular Vader.

Scorned has also been very well engineered, with poise and clarity enough to discern the slight complexities inherent to the riffing, but also a lot of punch to each of the low end guitar progressions. The listener will find either his (or her) physical or mental form flailing about violently through each varied act of punishment. Masachist is not a highly technical outlet, but there's a wealth of variation here to keep the ears from gluing to any one, predictable pattern, and with musicians like percussion paragon 'Daray' Brzozowski involved, who has performed in groups like Hunter, Vesania, Vader and even Dimmu Borgir (live), and others that played with Yattering, Azarath and Decapitated, you're in strong hands. They know when to erupt into fits of concussive clamor, and they know when to restrain themselves and let a riff settle, and they're not afraid to break up the morass of meticulous hostility with some simple, atmospheric ebullitions. There are leads present, but they're often quick and to the point, never flagellating themselves at the listener's expense.

Even if Scorned isn't the most memorable record of late in this niche, it's overall quite impressive, and trumps the 2009 debut Death March Fury with relative ease. Fans of USDM staples like Blessed Are the Sick, Gateways to Annihilation, Pierced from Within or Close to a World Below might be thrilled to hear their influence upgraded with traces of other Polish upstarts like Lost Soul, Trauma, and Calm Hatchery.