Perdition Oracle - Litanies of the Serpent (2012) 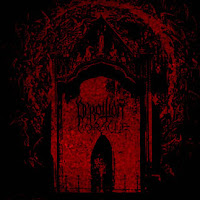 Though it's not a place I've ever physically attended, the Australia of my ignorant American imagination has forever transformed from a landscape of bright, unforgiving desert, Chopper Read admiration, and awful Paul Hogan quotes to a fulcrum of shadowed agonies manifest through a small sect of black metal bands. I've not been so excited about a particular scene in this genre since Finland and Germany 5-10 years ago, and I've not been so excited about Australian music since Midnight Oil (and that's not a jest, I love that band). So it's not much of a surprise to me that IV, the force behind projects like Ill Omen or Temple Nightside, a former member of Austere and Woods of Desolation, and one of the hellions involved in Nazxul (whose Iconoclast remains one of the best black metal records I've heard this past decade from ANY continent), succeeds once again with his latest endeavor, Perdition Oracle.

From the very face of this album, before listening to a single note, you can already ascertain its chilling and oblique characteristics. The artwork is in blacks and muted, infernal reds, seeming to imply some hellish, cavernous space in which the music will inhabit. There are very few liner notes. The tracks are given Roman numerals in place of titles, a passe technique perhaps, but one that is ever effective when the artist wishes to create a sum experience and not so much a parade of distinct, accessible tracks. There is the sense of the unknown, as if the damned spirit of the listener was set astray to the Underworld with naught but a single, glowing candle to guide it into the depravities and tortures which await it, and so does Litanies of the Serpent take us into a realm of atmospheric suffering, which like so many of IV's other projects, roots itself in the Scandinavian precepts of Emperor, Mayhem, Burzum, Darkthrone and Satyricon and then offers a lush, primal embellishment of resonant atmosphere created through reverb and distance.

Litanies of the Serpents certainly sounds like it's being experienced from an adjacent chamber, with tinny and simplistic drumbeats that support the roiling walls of rhythmic distortion. The vocals here alternate between an obscure, genre standard growl/rasp hybrid and then a droning, clean depth as in the final moments of opener "I", and the result is like this fulsome, haunting procession of forsaken monks forced to sup in the vaults of Hell. It's incredibly creepy and helps define the composition as something slightly more than your stock, paint by numbers black metal, which Perdition Oracle gorges upon and then regurgitates with a bleak hypnosis. Some of the blasting sequences and tremolo guitars definitely seem familiar, not exactly beacons of originality, but their texture in the mix is nonetheless mesmeric and beckons the listener to follow through both darkened subterranean spaces and towers of fell majesty. Really, the only point at which the sound ever becomes redundant would be the lengthier hymns like "I" or "IV", but otherwise IV there is enough variation to cover the reined in duration of the other cuts.

Ultimately, if you enjoy black metal that is fairly lo-fi and atmospheric without necessarily sounding like it was recorded in a dank basement latrine, Litanies of the Serpent is an effective, desolate and disquieting experience which fills up its 44 minute bulk well enough, with few moments of heedless repetition. If you've heard and enjoyed the sounds of Atra, Ill Omen, Temple Nightside and Drowning in the Light then this should prove a logical expansion of the ranks, but bear in mind that it's not an album where you'll want to pick and choose individual pieces, but more to behold in its full, ghastly splendor.