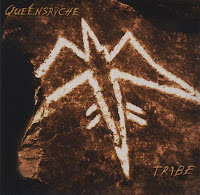 Tribe is the sole 21st century Queensrÿche studio effort to date which does not immediately induce nausea and disappointment, a testament to the album's cohesive vision and the obvious confidence manifest through Chris DeGarmo's rekindled involvement in the group, as short term as it would prove. At once, the music has a more positive and inspirational quality about it which doesn't feel like its dragging its knuckles behind the success of the Empire album. There are no cheap ploys to reenact a "Silent Lucidity", and the 'tribal', far Eastern incorporation of melody and percussion coursing through the rhythm section presents a worldly and distinct Queensrÿche which seems far more loyal to the band's ideals of progression and expansion than the sagging ennui of records like Hear in the Now Frontier or the laughable Q2K. Had Tribe been the album that followed up Promised Land in around 1996-1998, perhaps it would have cushioned the group's fall unto irrelevance...

That's not to say that I think this is necessarily a 'good' album, and Queensrÿche was still quite distant from a point at which it could muster the chops and chorus strength of its 80s fare, but Tribe is at least soothing and complacent to its average songwriting, and the ideas here aren't unworkable. The lyrics are largely the product of life-affirming, globe-spanning introspection that many of the band's more humble fans might not be able to relate much to; either that, or a shared midlife crisis which they could. Beyond that, though, they are not poorly composed, and there is enough imagery cast about in the verses to exhibit some effort in their composition. Cliches are often paired up with more unique prose, as in the very first verse on the album: 'You're an angel with your wings broken, wearing sandals that I tripped in/You're a holiday already taken, a cocktail that's stirred never shaken.' Also, as one finds so often in radio oriented highest bidder pop music, the chorus lyrics are pretty bland, since the band figures you'll be more attentive to the actual melody of Tate's voice than what is being said. Not that Queensrÿche was ever the haven of expert wordsmiths, but where "Eyes of a Stranger" gave me chills, this record couldn't even summon a goosebump.

Musically, Tribe exists at this crossroads of airy progressive rock circa Promised Land or Hear in the Now Frontier, infused with a more eclectic array of Rockenfield's percussion, and an almost groove metal subtext during its 'heaviest' moments, which are not exactly very heavy. You can certainly make out Chris DeGarmo's presence, since several of the note progressions hearken back to that haunting breadth of the 80s, and he loves to just let some atmospheric series of chords ring out against the drums and bass, but the harder, slight grooves that fuel tunes like "Open", "Tribe" or "Desert Dance" would not be entirely out of place on a Tool record, so much of the aggression here, where it exists, is borne more out of the 90s than the band's own 80s efforts like The Warning or the eponymous EP. This isn't necessarily an unwelcome strategy for the Washingtonians, who are attempting to keep themselves fresh and not entirely lose that metal undercurrent which won them their career; but at the same time, it renders Tribe immune from any tangible sense of intensity. They never sound pissed, or petulant, and this limits the emotional range of the album.

Other issues I took with Tribe were the lack of spectacular chorus vocal melodies, and the presence of some lamentably generic, escalating chord patterns that any listener will have heard a few hundred times before (at least). For instance, "Losing Myself" throws away a curious, uncanny verse segment for a totally pathetic "Higher Ground" style chorus which is lazy and ineffectual. "The Art of Life" builds a busy enough momentum and then...never really goes anywhere. Acoustic ramblers "Rhythm of Hope" and "Falling Behind" have a great tone, but once the band electrifies for the chorus, they just don't deliver the expected money shots. It's a shame, really, because Geoff Tate is technically in fine form through the album, keeping busy through "Desert Dance" or "Tribe" itself across numerous harmonies and interchanges, but once they hit those presumably climactic points of the songs, they feel stubbornly unsticky, occasionally tragic and lame (like the jumpy white man's hip hop bit that closes out the chorus of "Desert Dance"). The only tunes here which stood out to me were "The Great Divide", for the strong flow of the moody, oft bluesy guitars, and the closer "Doin' Fine", which sounds like something Rush might have written for a 90s record, with a few decent chord choices in the chorus that bring it all together.

I also dug Scott's drumming in "Losing Myself", "Tribe" and elsewhere. Again, it's pretty reminiscent of Danny Carey from Tool, but the fills and steadiness match well with the aesthetics Queensrÿche wanted here; if only the riffs and vocal melodies would had chosen to more fully capitalize on his foundation. One area in which I could find no fault was the production, as clear as day. The guitars were dense and chuggy enough where they needed some weight, and graceful enough elsewhere, especially on the slightly distorted tinge in "Blood" or "Desert Dance", and the bluesy, wistful leads work well in flushing out the atmosphere. Jackson's bass is ample and flood-written, but otherwise he's not much of a presence throughout most of the record, with the exception of a few choruses (like "Desert Dance") where he veers away from the guitar. On the whole, Tribe was not a complete embarrassment. It was certainly the strongest record they'd released in almost a decade, and it's superior to what they've put out since, but it's not without its own flaws that place it well below the threshold of quality the band had established in their early win streak with DeGarmo.

Verdict: Indifference [6/10] (held the starlight inches from my face)