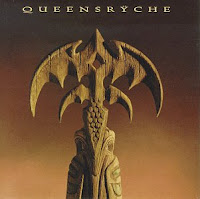 Promised Land is the last Queensrÿche record I can actually recall being excited for, or even having enjoyed, and to some extent it's the standard I hold up most of its successors to in terms of their comparative quality. I say this because, with few exceptions (Mindcrime II), most of the albums following it in their career have more or less attempted to copy its formula (Tribe coming the closest): balanced, melodic, and 'progressive' rock, occasionally getting mildly heavier, but usually not. That's not to say they were all conceptually influenced by this album, or precise clones, but clearly this was the benchmark, the blueprint from which they've continuously been drawing even though the audience have long since stolen their buckets off to wells elsewhere.

No, Promised Land is not on par with the more metallic Queensrÿche of the previous decade, but it's at least more solid than its predecessor Empire, and while it's readily accessible for all rock fans, the album doesn't feel like so much of a sellout. The music and production come first here, and both are vibrant and worldly, qualities I would not have thought of when listening through their earlier fare. In fact, if I'm basing the decision on just the mixing and engineering, then for sure this is their most beautiful full-length to date. The drums, the vocals, the bass and guitars are all prominent and brilliantly defined here. In those few instances where the band gets heavy (at least for Queensrÿche), you can really feel the emotion come out, despite the stark simplicity of the actual chords being used. Vocal arrangements are incredibly melodic, often crooning with such crystalline abandon that I am reminded of California's Lizzy Borden (in "One More Time", "My Global Mind" and a few others). What's more, this album manages to sound exotic, not only for the Eastern and tribal influenced percussion, cello and sitar progressions in the powerful single "I Am I", but even in the drifting, folksier Floyd-like pieces like "Bridge".

It's one of the few albums in my collection where I find myself forgiving of its power ballads, its numerous 'tender' moments, because they are very well written, whether it's "Bridge" and its warm everyman family appeal, "Out of Mind" with its tear wrenching chorus, or the sultry escalation of "Lady Jane". They don't quite shine as brightly for me as the soaring semi metallic anthems like "Damaged" or "Disconnected", the former with its pumping bass-lines, catchy and minimal chords and superb, rising vocal lines; the latter a lazy groove with a bit of Zeppelin influence and a mix of moody, lower ranged vocals and an almost funky/80s clamor. There are exceptions here, like the piano/vocal closer "Someone Else?" which I struggle to recall even moments after hearing it, but in general this is a tremendously focused and balanced effort, each of the members contributed hugely to its inspired swath of sound, whether it deigns to occasionally rock your face off or soothe and steady your troubled thoughts.

Since I'd rather erase its sad successors from memory than continuously suffer them, I often think of Promised Land as a personal 'last hurrah' for Queensrÿche. Granted, by 1994 the band was thriving off its name and its earlier hits, and despite solid sales (and high initial charting) this album didn't create quite the same stir as that before it, probably because it didn't possess a dreary-eyed prom ballad like "Silent Lucidity" for the 80s hairspray sect who gobbled that up alongside Warrant's "Heaven", Slaughter's "Fly to the Angels" or Extreme's "More Than Words". But fuck that crowd, because this is superior to Empire in all regards, and the thing sounds so gorgeous on most of my speakers that it doesn't even seem to have aged a day since its release. Producer James Barton truly killed it here. It's like the flimsy songwriting of Hear in the Now Frontier or Q2K done RIGHT, and would have made a great swan song to kick off a permanent vacation for the band...