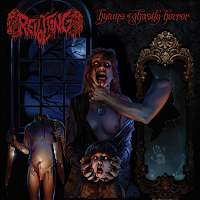 Awaken to the alarm clock. Brush teeth. Make breakfast. Death metal. Lunch. Death metal. Dinner. Death metal. This is surely the daily cycle of 'Revolting' Rogga, the man who must by this point have the broadest personal investment and discography in all the genre, the world over. Revolting is not one of his most long-lived projects to date, but he's managed to release one full-length per year in addition to his prolific schedule elsewhere. The 2009 debut, Dreadful Pleasures remains my favorite of these, even after listening through Hymns of Ghastly Horror a few times, but all the albums have more or less maintained the same general quality and theme, and you're getting exactly what the trio is advertising: some of the most campy, horror-inspired, frightful kitsch outside the Razorback roster.

In terms of sheer sound and recording aesthetics, Revolting is barely a decapitated head's throw away from a few of Rogga's other bands Ribspreader and Paganizer. The chunky Swedish tone is implemented over a variety of riffing patterns, many of which trace their lineage back to the usual suspects like Entombed, Dismember, Grave or Unleashed, but others surprisingly melodic in the vein of something like At the Gates or the more recent Evocation material. Hymns of Ghastly Horror is in fact a decently varied record, whether it's the morbid death & roll of instrumental "The Thing That C.H.U.D. Not Be" with its charming samples from the cult mutant flick, or "Their Thoughts Can Kill" or "Psychoplasmics" which are threaded with copious speed thrashing rhythms, or the denser, hilarious chug-fest of "Kinderfeeder". There are at least a dozen hooks through the 36 minutes which beg for a replay, despite the fact that a lot of the progressions seem samey to anyone who has followed the Swedish death revival in the past decade. The rhythm section of Grotesque Tobias and Mutated Martin is as dependable as ever, even if they're not doing anything much else than support Rogga's endless supply of riffs.

Actually, whilst comparable to its predecessors, Hymns of Ghastly Horror might just have the best overall production for this project to date, nearly on par with Rogga's higher profile Demiurg. Guitars are sodden and repulsive, yet the melodies and brief leads scream through the mix. Vocals are loud and reliable, often molded in L-G Petrov's hoarse tension, but often even more brutal and guttural as if they were drawing more influence from early Dutch or USDM. The colorful subject matter of the lyrics is, as usual, incredibly fun, especially for those who love cheesy horror/sci-fi flicks and don't take it all so seriously. Serial killers ("The Hatchet Murders"), extraterrestrial threats ("Ravenous Alien Spawn"), even what seems like a little Italian giallo horror gets a nod. Revolting enjoys their cult cinema, and they celebrate it much like the more festive of us give our patronage to haunted houses, hayrides and horror cons. Hymns of Ghastly Horror might not be anything out of the ordinary, or much of an accomplishment for a man that might just release a dozen albums by next month, but it's solid entertainment. Better than last year's In Grisly Rapture, thought it falls just shy of the first two records.