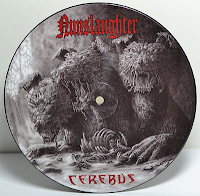 Though originally released in 2003, Hell's Headbangers have recently reissued Nunslaughter's Cerebus EP as a part of their 7" vinyl initiative, adding gorgeous artwork to the disc itself, and a pair of bonus tracks for an additional value. Though the songs "Mother, Cunt, Whore" and "Cerebus" have actually been available before on demos and a rare compilation, this is only my first exposure to them, and I must say that I am officially impressed: these are two of the best individual tracks I've actually heard from the prolific, longstanding goat-perverts of the US underground. So if you're interested in their catalog, enjoy the vinyl format and can spare a few bucks, this is as good a place to start as any.

As usual, this is death metal which wears its speed/thrash influences plainly on its sleeve for all to behold; characterized with gruff if not incredibly ominous vocals, and crisp fretboard attacks that call to mind 80s extremists like Slayer, Possessed and Razor. Nunslaughter has always approached its music with a brazen authenticity that couldn't give a fuck about higher technical standards, originality or heavily polished studio production, but nonetheless Cerebus is pretty clean sounding. The drums pop, slap and kick without much ceremony, and the presence of the bass is minimal beyond its role of supporting the guitars. Vocals are bloodied, brief barks without any heavy saturation of effects, and the whole thing honestly sounds like the band is giving a pristine performance in their rehearsal room. Of the two cuts, "Mother, Cunt, Whore" is more of a blistering, psycho thrash abuse, while "Cerebus" incorporates a slower mood, more tremolo picking and a primal death metal undercurrent more effectively. The two work quite well together here, and all the breakdowns and tempo shifts are well structured if mildly predictable.

The one caveat to this is that the rehearsal versions of the songs, which comprise the EP's bonus content, are really not all that much of a boon. The vocals are more cavernous and shook my headphones, but the drums are heavily oppressed by the raw guitar tone, and it sounds more like an ill-recorded live gig where some primitive recording device was unable to pick up the band in its entirety. For some collectors and hardcore fans, the rehearsals are a thing of importance, purportedly meant to represent the band at its most sincere and uncluttered by studio wizardry, but in many cases they just sound like shit, and were never meant for the audience's consumption. I'm afraid that these two lean towards the latter class, and add little to the EP other than to show you just how much better the studio incarnations are. So, really, if you're going all in for this, it's for the better dressed tracks, disc art and collectible nature; and considering how rare the other releases including the songs might be, it's probably still worth having if you really love this band (and don't already have the original EP).