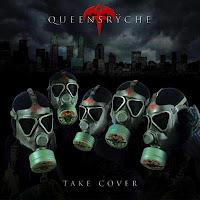 It's one thing when you've got some upcoming band releasing a covers album of groups that influenced them, or participating in a tribute to a single artist with others of a like mind. Or even when an established act performs some rip roaring rendition of a classic and tucks it onto an album amongst originals. But hearing a (once) commercially successful outfit like Queensrÿche tackle an eclectic selection as they do here is always a risky proposition, and Take Cover's few worthwhile tributes simply do not compensate for all the missed opportunities and bland rock reductions of tracks that once possessed a spark of actual life in their earlier incarnations. Like British pop royals Duran Duran, whose 1995 collection Thank You celebrated a surprising assortment of influences in a very shitty way (nonetheless charting on Billboard), Take Cover is largely inconsequential and unmemorable, especially coming from a band whose prime era of creativity is itself covered quite often.

If one was hoping Queensrÿche was about to reach back through history and grab itself by the balls and rip out a record of metal tracks, then they will be sadly disappointed with this album. Apart from the limp but passable version of Sabbath's "Neon Knight", which has been covered more times than the news of JFK's assassination by this point, this is largely drawn from the band's 70s and 80s rock influences. I doubt too many people would be surprised that they take on Queen, Pink Floyd, or The Police, all of whom played a part in the Qs' creative inspiration from about 1986 to the present, but of these only Floyd's "Welcome to the Machine" worked for me, since Queensrÿche deal well in that same sense of spatial, open atmosphere that defined the original. I was actually more satisfied with the songs I just wasn't expecting, like Peter Gabriel's "Red Rain" which doesn't actually sound all that bad with some heavier guitars, and Tate's timbre transforms it into a sort of Gothic rock aesthetic. U2's "Bullet the Blue Sky" is presented in a raucous and loud live format which fills out its 10+ minutes nicely, and Buffalo Springfield's "For What It's Worth", one of the least expected tracks, is at least catchier than most of the humdrum acoustic rock Tate and his former cronies were ferreting through the 90s and 00's.

Most of these, discounting the live cut, are rendered in the polished, fat production the band had been using for their own albums in the years leading up to Take Cover,  pop and radio oriented and not exactly screaming with the addictive energy this band has so desperately lacked. If I'm to give Queensrÿche any credit here, it would be that they seem to make these tunes their own, thanks to Tate's unique presence. Aside from the thicker guitar tone, though, they don't deviate far from the originals, but on something like "Almost Cut My Hair" (Crosby, Stills, Nash and Young) or the rocked up Jesus Christ Superstar staple "Heaven On their Mind", they've managed to transform something naturally alien to their usual sound into a piece that might flow well in a live set alongside Promised Land or Tribe cuts. In short, Take Cover is adequate, seasoned gentlemen covering safe bets, but its hardly inspirational and in no case would I ever deign to experience any of these over their originals, even to compare and contrast. This isn't entirely awful, but neither is it worth much unless you're the sort of Queensrÿche lunatic that just can't say no.