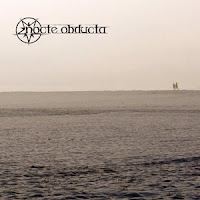 This is the seventh and final offering from Germany's Nocte Obducta, a black metal band who have always had a folksy edge to their style, and I'll always remember their very simple, do-it-yourself album covers. Sequenzen einer Wanderung is their swansong, and offers somewhat of a departure from the previous material. There are only two tracks here, "Ende" and "Nebel II", with a total playtime of 44 minutes.

Now, for the departure...you won't find black metal at all on "Ende". It's a trippy, bluesy atmospheric prog rock/folk number that reminds me more of Pink Floyd than anything else. Subtle synths and vocal samples populate much of the track, and there is one point where some heavenly choirs and a heavier bluesy doom riff come in. "Nebel II" is just as experimental, though it features a lot more of the band's metal roots. Still, there is nothing here remotely black metal so I can't justify describing it as such.

The production is crystal clear, the songs have a curious atmosphere to them and since so much of this is so simple, the atmosphere is what really counts. To that extent, the album succeeds. But as far as being memorable, not so sure. You might like this as background music when you're reading a novel or studying, but I can't highly recommend it. It's not a bad disc, but if you're looking for a typical example of Nocte Obducta's style, search elsewhere, earlier in their catalog. Because this is quite different.