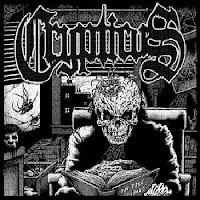 Another of Razorback's excellent signings, Crypticus delivers its sophomore effort with finesse. The band is a single man, Patrick Bruss, who performs all the instruments, with the exception of drums which are programmed (but never intrusive at all, they are repressed in the mix just enough). The style here is a mixture of creepy old school death and thrash metal with Bruss' unique guttural vocals and a flair for kitsch horror. I've often compared this band to Deceased, except more brutal, and that holds very true here. The album reminds me a lot of something like Fearless Undead Machines for its proof of concept, in this case the tale of a mad scientist.

While Dedicated to the Impure was a great debut album, this is better. The songs are brutal and catchy, the guitar riffs are sick, the sample clips add just enough silliness to the horror concept. Tracks like "Astrophobos" and "Rotting Masters" rock out with vile and kinetic energy, adorned in doom driven melodic leads. "Lurkers in the Lab" and "Moat of Blood" are perfect examples of mad scientist metal. "Unnatural Science" just lays waste to the listener with its flowing, proto-80s death thrashing rhythms.

The production on the album has a pretty boxy feel to it, doesn't sound quite like anyone else in death metal that I'm aware of right now. Whatever process Bruss is using to put this material together, it works well, and he manages to recall a lot of retro influence without being some simple clone band. They Called Me Mad! is yet another score for Razorback, a label that is literally on fire right now. Fans of fellow roster acts Ghoul, Lord Gore and Blood Freak will truly chew this up, as will any death metal fan with a taste for silly old black and white horror films starring Vincent Price. Probably the best death or thrash you will hear from Colorado. Good times here.