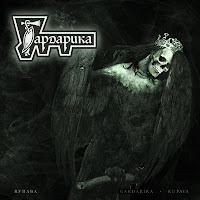 When am I going to get on the ball and start learning Russian so I can translate all these releases? It's far past the hour. Gardarika is an interesting band performing a rather unique progressive metal, with some thrash to it as well as a hint of classic earlier metal.

The band has existed for quite some time, well over a decade, but this is their first full-length album. Two of the distinct elements are the traditional vocals of Alexandr Izgarniy and the busy bass of Sergey Kuryavin, they blend well with the guitar riffs and drumming. It may just be my own ignorance, but the vocals give it a folksy feel. You can hear a lot of great influences here, this is 'progressive' thrash metal after all so you can hear a dash of Voivod, or Watchtower, though the vocals take it into a whole new area. I can't say enough for the bass playing, which is amazing on tracks like "Незабвенная " where it becomes this dominating central force under some good leads and riffs.

The album's mix is quite good, you can hear everything nicely and it does have an earlier vibe to it. It's not perfect, but it's unique and engrossing enough that you can listen through without becoming bored, simply because the band's riffing is so adventurous. You don't hear much like this band anymore, they clearly have good roots and use them to craft something worthwhile. I am eager to hear how they will develop in the future, because this is a pretty good start! Download some samples from their site and check it out for yourself.