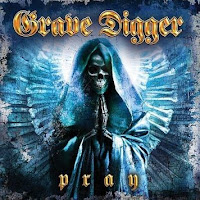 2009 will bring a new album from Germany's Grave Digger, Ballads of a Hangman. It appears to be yet another concept album, but this is a formula which has worked well for Chris Boltendahl and crew for the past 7-8 albums so why change it now?

"Pray" is the first single from the album, and though it comes off rather pensive and somber for the band, it's a good one, with a catchy main riff and a workable chorus. The single contains a decent cover of Motorhead's "Overkill", with Chris doing a pretty good Lemmy impersonation. There are also two other originals here. "My Blood Will Live Forever" is a fairly average rocker, but "When the Sun Goes Down" is actually a pretty good track, on par with "Pray" and possessing a similar feel.

As everyone knows (or at least, you do now), I'm not a huge fan of the CD single format, but Grave Digger offers enough of a teaser here that it should tide over fans until the album drops. What I've heard here definitely gives me a positive feeling that we could be in for another good one.