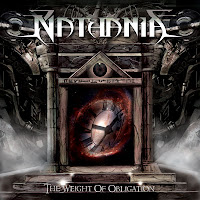 It's always great to see more bands from around the world throwing their 'weight' into metal genres where you wouldn't quite expect them. Nathania hails from Thailand and on their second album, they perform a symphonic power/progressive hybrid with an awareness for classic thrash and speed metal.

Vocalist Daniel Sandberg (the non-Thai member) has a grittier vocal style which reminds me of bands such as Evergrey or later Sentenced. His vocals are by no means bad, but his limited range is generally sub-par to the rest of the band. On the flip-side, he can really help drive the heavier riffs home with a nice snarl.

The music here is pretty good, though. Guitarists Tony Yaspan and Sc. Sang perform well in all circumstances, whether they are putting out some classic speed metal flair, gorgeous lead lines or even tasteful acoustics as on "Lord of Your Mind" or the ballad "Light My Way". I'm not sure who the keyboards are credited to but they play an important role on the album, as it has a symphonic edge typical among European power metal bands. Tastefully executed here. Most of the songs are rockers. "The Weight of Obligation", "Lost Soul" and "Immorality" are all catchy tracks.

There are areas in which the band could be better. Their ballads need a little work, especially with this particular vocalist, and that brings us back to the original problem. His vocals just need a little more work to match the music. He does excellent on the heavier side, but when he's trying to sing in a melodic style it often falls flat on its face. It does cripple the album somewhat. The production also isn't perfect, but it suffices. The guitar tones could be a little thicker and maybe the vocals mixed in better. All in all, this is a good album here and if you want to check out some power/prog from somewhere outside the common countries, Nathania are worth a listen (even if their style isn't completely original).