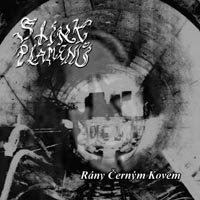 The domain of many a black metal band is the forest, or the mountain. For some, it is the very domain of hell, an eternal blazing landscape of suffering. But for the Czechs Stíny Plamenù, it is the sewers of forgotten waste which run as neglected lifeblood through and beneath the great metropoli of our Western European civilizations.

Rány Černým Kovem (translated Hits With Black Metal) is the band's second full-length album, and a pretty straightforward, grim black metal album of the faster variety. Truth be told, there is not much 'sewer' to the sound of this particular album, in comparison to some of their later efforts, it manifests primarily in the lyrics. This is your average, raw but not painful to the ears production. The band is quite savage in their delivery, tracks like "Tisíce Zvradelních Bestií" and "Voda, Zvradla A Bouře" show the straightforward, grim violence at their command. Rarely do they let up from their snarling delivery, and if so it's usually for a brief acoustic delivery like the intro to "Zvradlonoš". There is also a cover of Dark Funeral's "Open the Gates" to close the subterranean festivities.

Sewer black metal is an intriguing concept and one that Stíny Plamenù will embrace better tonally and thematically on their later albums. In particular I recommend the excellent Odpadní galerie. As it stands, Rány Černým Kovem is a listenable but average black metal record, with few standout riffs. However, if you are in the mood for some snarling, tearing East European black metal then this would likely sate you. With the exception of the slower track "První Zvradelní Bitva", the album did little to maintain my interest.