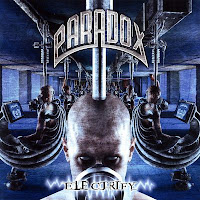 In a year seeing several thrash bands return to the spotlight with some killer releases (Metallica, Testament among others) it would be far too easy to overlook this masterpiece of German thrash. This is only the fourth album from Paradox in a career dating from 1986. There was a large hiatus between the excellent Heresy and 2000's Collision Course, and another until this.

Well, guess what? It's been more than worth the wait, as the Germans have produced what is likely the defining album of their career. Like Mekong Delta last year, the joints of this band have NOT grown stiff over the years. If anything this is faster and more technical than their earlier work, but it's an absolute riffgasm. "Second Over Third By Force" begins with an acoustic intro (reminiscent of some of the better tracks on Heresy) and then proceed to unleash the wolves with its amazing, melodic thrash riffing and the distinct vocals of Charlie Steinhauer. For a good idea of his vocals, imagine the melodic stylings of Peavy (Rage) or Deathrow but not as high pitched. The rest of the album is littered with a triumph in technical thrashing. "Monument" and "Hyperspeed Hallucinations" are top shelf. "Bridge to Silence" is a beautiful cacophony of gathering melodies of sadness. "Infected" and "Disconnected" rock the hell out.

The lyrics are perfectly reminiscent of other progressive thrash from the 80s, always pensive and never dull or stupidly retro. I can't qualify enough just how it is important to me these days to see bands who are NOT mired down in bullet belt worship or copying their elders. Paradox has no need for any of this shit, they have created a thrashterpiece which is as forward thinking today as they were in the 80s, and they stand among the very best bands in the world still chipping away at that dream. Support the effort! You will not be disappointed.