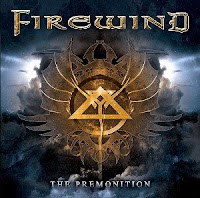 I've long since succumbed to the fact that Firewind is Gus G's best band, superior to Nightrage or Mystic Prophecy and far more consistent than even Dream Evil. They are also basically the premiere power metal band coming from Greece these days, and their past two albums Forged by Fire and Allegiance have been quite good. Now they return for what is their best album yet, a rousing celebration of melodic power and speed laden in quality lead work, bold production and the memorable vocal hooks of their latest crooner Apollo Papathanasio.

This is a pretty furious power metal album, taking no prisoners as some ominous acoustics part way for the raging "Into the Fire". "Head Up High" rocks with abandon, centered on that kickass melodic hook. "Mercenary Man" is another smoker, with an instantly memorable hook and an 80s verse that even reminds me of something like Rick Springfield. I'm not kidding. "Angels Forgive Me" is driven by some slight synth orchestration. "Remembered" is just amazing, love the opening riff and the choppy speed riff under the verse. Some of the slower tracks "Circle of Life" and "My Loneliness" give you a little break before the action explodes back onto the stage with "The Silent Code". There is also a cover of Michael Sembello's "Maniac", the pop hit from the Flashdance soundtrack. And it doesn't suck! The album closes with the powerful "Life Foreclosed", a slower number.

They've managed to top themselves quite well and they've delivered one of the best power/speed metal records of the year, in fact it may be the best from Europe so far in 2008. Well worth your time if you're a fan of any melodic power metal or if you have an appreciation for Gus G's other projects.