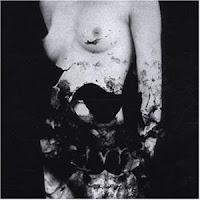 Ever a fascination of mine, the German band Bethlehem have evolved from one of the most sinister blackened doom metal sounds in existence to a unique goth/black metal hybrid. These days, they tend more towards the former, but in 1999 they were still straddling the two styles together, and Profane Fetmilch Lenzt Elf Krank is an excellent example of where they truly shined.

The EP consists of only two tracks. "Gar Albern Es Uns Totgeban" begins with their patented, deep gothic leads over tortured vocal madness. But this breaks away into creepy pianos and spoken word, and then carnival music...before returning to the powerful riffing of the intro. "Von Buttersüssem Suizid" starts off simply with drums and a grooving gothic bass, then a sort of driving, gothic anthem with some metal wailing guitars. Both of the tunes are catchy, like most of Bethlehem's material.

This EP was originally pressed as a 7" in 1999 but an mCD version became available the following year. Most of the band's material is of good quality, and this is no exception. Well worth tracking down especially if you are fond of good gothic metal or this particular band's mid-period like the Reflektionen auf's Sterben EP and S.U.I.Z.I.D. album.