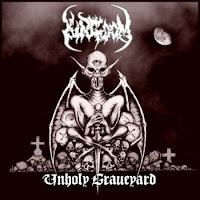 I'd like you to cast your thoughts back to the early 90s, when death metal was sheer and brutal and extremely evil sounding, yet never too wanky. When bands like Incantation and Vader were just starting to hit their stride and creating morbid visions so many others would follow. If you took one listen to the debut from Poland's Kingdom, you would thing those days of abyssal yore had never ended. Because this is a slugfest or monolithic old school proportions where there is no escape for your life. Total death!

After a dark holocaust intro piece, the band bludgeons you directly in the skull with "Riot in Heaven", and it is god damned heavy (no pun intended). A simple old school blast beat lays a foundation for grinding and chugging guitars. "Battle Eternal" is faster and meaner. "Crown of Thorns" is groovier, like a bit of Napalm Death, Bolt Thrower and Incantation mixed into a blender. If this band weren't already true enough to their roots, they cover "Into the Storm of Steel" by Angelcorpse. Sounds like fun to me!

Kingdom is NOT an original band, and they could not care less. Don't get me wrong, I love all the space edge and progressive death metal and the various things bands are doing with it, but it's nice to occasionally be reminded of the punishing and hopeless morass this all evolved from, and this young Polish outfit successfully capture that 90s death metal vibe with a tight mix and a notorious sense of evil. More of this, please!