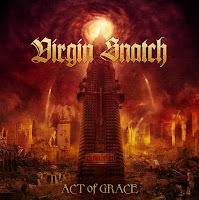 Much can be said for the vast Polish death metal scene, perhaps even so for the developing black metal scene, but what of thrash? Aside from a few classic bands in the 80s/90s, some of whom still exist, who carries that torch there?

Virgin Snatch has been developing their brutal thrash for years now, and their previous few albums have been pretty good. Act of Grace is their fourth full-length, and it's a mixed bag for me. On the one hand, the band continues to excel when they're performing the faster paced thrash/death, but the clean vocal touches, and more 'modern' groove metal elements on the album often feel unnecessary. Not 'bad', mind you, but certainly the weak points of the effort.

The title track starts off raging with some driving and exciting, thrashing speed, then some pit grooves before picking up again. The bass is nice and the leads are pretty good. "Slap in the Face" begins fast as fuck before breaking out into some clean vocal breaks and even a pseudo-Meshuggah breakdown. Some of the more exciting riff-fests arrive a little later on the album. "Through Fight We Grow" begins with some great riffing, as does the generally slower "Walk the Line". "Make Another Donation" is an exciting hybrid of melodic death and thrash, with again the exception of some of the clean vocals.

The mix on the album is decent though the harsher 'death' vocals are a little loud. The bass playing is good and the guitars evoke some worthy riffs. I hear more than a little Testament in the charging songs, harmonies and the way the bold vocals, even if they don't sound exactly like Chuck Billy. In fact, the album is far more reminiscent of Bay Area style 80s thrash than the Germanic influence you might expect from a Polish band. The songs here are decent but not really anything I'd return to often. However, fans of 'modern' thrash metal might just have something here to appreciate.