There's a lot to be said about Peter Molyneux's latest baby, Fable 2. I'll start with the good things.

The meat of the Fable 2 is combat, plain and simple. Fortunately, combat in Fable 2 is actually quite fun. It almost feels like a Devil May Cry-lite, with surprisingly tight controls and highly enjoyable thwacks and bangs. To get the most out of the experience, you'll want to play a balanced character, which is good, because the game basically forces you down this path anyway. Headshotting Hollow Men with a flintlock pistol is a glorious thing, and combat is really the saving grace of the entire experience.

For all the speculation and pre-release hatred that the Dog was given, your Dog is fucking cool. It's great to put on an eyepatch and see your little pup grow a black patch of fur over their eye. It's even cooler when your pup limps around after taking some hits in battle and you feel a twang of pain in your heart, cursing the shitty "expression wheel" control scheme as you try and dig out your magical "heals all dog wounds forever" potion. You really and truly grow to love the dog in Fable 2, Molyneux wasn't blowing smoke on this at all. While I would've liked to see the dog morph a bit more, like your character, and maybe even adapt it's breed to match your ethos, it's a bit like asking for gold-flaked sprinkles on your already delicious sundae. 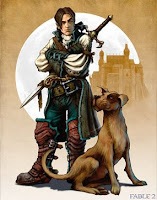 On the more average tilt, the "social" aspects of Fable 2 are pretty much as uninteresting as they were in the first game. Yes, having a wife that you can fuck and produce offspring with is fairly amusing for a few moments, but that's really all there is to it. Villagers crowd around to watch you fart, or dance, or whatever, and you can choose to invest in property or businesses to produce some income every few minutes. I'm not really sure what the supposed point is of all this, because I never found one in all my time with this game. I suppose it makes for some good forum posts and it's a novel way to expand upon gameplay options, but it's just not nearly as interesting or rewarding as the combat.

Being a Lionhead game, Fable 2 has it's share of bugs ranging from the eyebrow-raising to the controller-tossing. Reports of broken quests, broken saves, and all manner of progress-blocking interface weirdness flood the internet, and although I didn't personally experience anything game breaking, I did cock my head a bit every time my wife would look at me with her big, whore eyes and say "Oh, I love you so much" and follow it up with an immediate declaration of "You murderer! I'll never forgive you!"

Though it will definitely have it's supporters, I found the story of Fable 2 to be abominable. It's a generic revenge tale with some highly predictable elements and some less-than-stellar delivery and pacing. The truly odd thing about the story is that Fable 2 will definitely make you feel emotion in ways that other games with far better story and delivery can't. It's almost like reading a children's book that you've read a dozen times already. You know where it's been and where it's going, but there are still some great moments buried in there. Unfortunately, there are also still plenty of moments that fall flat on their faces. Some, like the ending(s), are too significant to be forgiven.

Also on the list of detriments, the art style is still mostly uninspired and bland, and there just aren't enough cool hats or other clothing for your character. The co-op is so feature-starved - lacking even independent camera control and the ability to play your own hero for the second player - that I can't in good conscience recommend it to anyone. Ignore the pre-release claims of Fable 2 being accessible to non-gamers; it's not, at all. The combat can be very frustrating to beginners, and the interface is so obtuse and flat out crappy that only a console RPG player could use it. Even then, those of us raised on the NES-era menus will stumble from time to time.

There isn't a whole lot to say from a metal standpoint about Fable, unfortunately. I played through the first time as evil as I possibly could, sacrificing peasants and even a few spouses to the Temple of Darkness, or whatever it is. The unfortunate thing is that the "evil" elements, at least for the player, are played off as laughably silly. "Friday is poker night" you hear on your first visit inside the Temple. You gain entrance by eating crispy chicks, fried chicken nuggets. You sacrifice your victims with a giant spinning wheel that determines their method of death. You get the idea. Lionhead never really seems to nail "evil" in this game except for the portrayal of some of the villains. Note: some. Despite playing through the entire game as a murdering, thieving shitbag, I never really felt like a villain. I would love to see future installments get downright satanic, but I doubt it will ever happen. 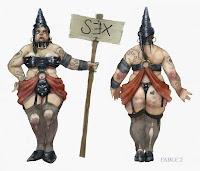 Fable 2 is a conundrum. This review has turned up far more criticism than praise, and yet I really liked it. Each and every time I played it, I was having so much fun that I could easily ignore it's flaws, and yet when I wasn't playing, the flaws were all I could think of. Fortunately for me, I kept coming back for more and rarely stopped to reflect on the holes in the experience. I would be remiss not to deduct some points, though, for the awful co-op implementation and the miserable story. All in all, Fable 2 is a good game with hints of both greatness and mediocrity, and so I do bestow a "win" upon it.

Posted by hero imprisoned at 1:23 AM