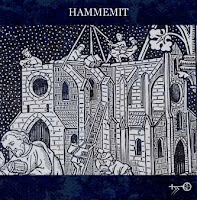 The debut for this dark ritual ambient project of former Emit members is difficult to describe, yet nonetheless fascinating. The central focus is the chanting of dark monk-like voices, layered in disturbing atmospheres which evoke a sense of rapture, of madness, ultimately doom. Evil guitar strings and droning ambient synths smother the distant words of this grim brotherhood.

The opening track "The Young Monk in Earnest" is almost a glimmer of uplifting hope here, featuring a single chanter with some percussion dispersed over him. Then the title track grows darker, and it is followed by the dense, deathlike pipe organs of "A State of Blissful Unknowning" and the masterfully grim "Shamelessly I Went Around". "A Joy So Near to Melancholy" is an instrumental, and "A Distance Not So Distant" returns with even more staggering, sweltering ambience. This track conjured images that I was lost in a winding medieval sewer system, and in the distance I could hear what sounded like dark, forgotten rituals transpiring as I became overwhelmed with labyrinthine paranoia. Yes, a single track from Hammemit can do this to you. Autothrall warned you.

The rest of the tracks are just as good, and this is one of the best dark ritual/ambient releases I've heard in some years. The chanting is just icing on the cake, providing an anchor to weigh in the strings, synths and rare percussion. The chanting IS, in fact, the percussion here, in an abstract light. A haunting debut and I hope this project will get off its feet and continue, I will await the next release and track down the former work of Emit in the meantime.