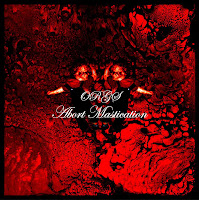 This is the debut from a punishing Japanese deathgrind band with a fairly predictable style. It's the same blast and chug you've heard many times, with a crazy mix of screams and brutal grunts, also typical of this genre. They're definitely into the medical gore side of things with song titles like "The Art of Disembowel Plan", "Teratogenic Fetal Fury", "Cranial Endorphin for Maniac" and "Affect Under Festered Skin".

Most of the tracks went straight in and out my ears, with the exception of "Haigh" which has some pretty wild thrashing and death metal riffs and a nice riff with a string of evil sounding, jarring minor chords. Had the rest of the tracks been up to snuff then we may have wound up with some decent deathgrind, but I can't speak highly of anything else on the album.

Yet another album to file under indifference, but if any of you reading this have some suggestions for similar brutality, I am all ears. Until then I'm going to stick to Nasum, Coldworker, Rotten Sound, Yacopsae, and the few other bands of this genre that I enjoy. That said, if you are an absolute maniac for this style, then you may actually want to give Abort Mastication a chance, you might like it more than I did.