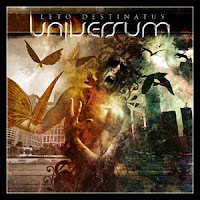 Universum are an Australian band performing pretty straight laced melodic death with keyboards. They've got all the usual influences, from Soilwork to Dark Tranquillity, and they do little to distinguish themselves from the hordes of similar bands coming out of Europe and the States.

The guitars pretty much play dead on At the Gates/Dark Tranquillity style riffs, with a few simple melodies tossed over for emotion. The band is adequate for the task, though I find many of the synth lines to be worthlessly layered in for more atmosphere. Vocalist Adam Soininen has the usual melodic death metal voices, with a few pitches, and unfortunately there are a few of those radio friendly 'emo' chorus parts that have been a mainstay in this over saturated genre for years. And the clean vocals here on tracks like "Invisible Scars" drag the entire production from average to awful.

I can't pick out any favorites on this album simply because there are none. The songwriting is mediocre throughout. It's adequate enough to sound semi-professional, but I wasn't hearing any of the fire and inspiration that really drives home a great melodic death album, even a good one. That said, the band isn't as annoying as many bands who merge the style with metalcore, these guys are pretty much straight melodic death with keyboards. There is a guest solo here from Tomy of Mors Principium Est, just one example of a better band in this genre.