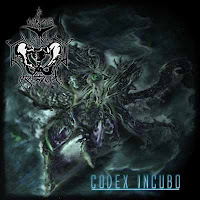 I am always intrigued by the use of science fiction and Lovecraftian concepts in death and black metal, and Houston duo Cosmic Atrophy deliver plenty of potential, even if this album isn't quite honed to perfection just yet.

Codex Incubo is a debut of brutal yet progressive death metal presented with a lot of dynamics and a dense, oppressive atmosphere. Cory Richards' brutal vocals dominate the mix over adventurous guitars, fusion leads and some solid bass playing. Unfortunately it doesn't always translate into exciting music. "Prelude to Phantasmagoria" and "Consumed from within the X-Zone" offer a great preview of their style, but it isn't until the fourth track "Cydonic Adulation" that I was starting to get into the music. And this is a pretty good track, with some discordant Voivod-like segments. "Doomed by the Cancer Domus" and "The Granfalloon" are both slower and less interesting tunes, and the album closes with "Adrift in the Lifeless Sea of Black", a cosmic ambient instrumental which I rather liked for its 2 minutes. The lyrics throughout the album are pretty interesting.

On the one hand, I really do like this band's style. I think there is the possibility they could develop into a curious hybrid of Morbid Angel and Demilich (some elements of their sound reminded me of the latter). I just didn't think much of the material here was enough yet to truly immerse me, but I'm looking forward to hearing more.

Definitely interesting and unique material. I dig it, but I agree that there are some loose ends that could use tying. Hopefully we see more from them in the near future.