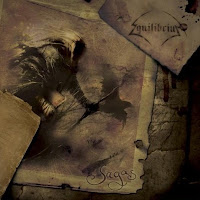 Turis Fratyr was a huge debut for this band, generating enough buzz to have the band counted among the upper echelon of the extreme folk metal scene, alongside Ensiferum, Finntroll, Thyrfing, etc. I thought it was a fun album, but not nearly as good as the hype it was riding. With their second release, Sagas, I sense an improvement in most areas. It's even more cheesy and bombastic, the synths are hilarious yet awesome, and the songwriting is quite good.

The glorious charge of "Prolog Auf Erden" begins the festival, almost immediately surpassed by "Wurzelbert"'s clarion call to victory. Through all the sweeping keyboards and Helge's Stang, what I love most here are the very solid guitar lines, building good riffs throughout that would probably work even without all the atmosphere smothering them. The rest of the album is fairly consistent with this song, there are a few mildly different tracks like "Verrat" with its more brazen, mid-paced grooving, driving opening verses, heavy on the guitar. "Heiderauche" is a pure atmospheric synth piece with percussion, and quite nice. Some of the album's best tracks are reserved for its closing moments, like the beautiful "Die Weide Und der Fluss" or "Mana".

In all you are getting over 70 minutes of music across the 13 tracks, so the value to quality ratio is enormous. The production here is excellent, the musicianship top notch, and the album also features some classical musician guests performing panpipes, violin, and so forth. If you're into the sweeping bombastic folk metal genre of Ensiferum, Turisas, Finntroll, Bal-Sagoth (the latter for the influence of the cheesy synth sounds) and others, Equilibrium has put together an epic here, which may at times feel silly, but don't they all? A job well done.