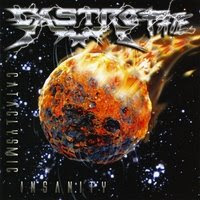 In the mood for some crunchy New York thrash with conceptual science fiction lyrical themes? Castrofate may be just what you ordered. The band has a remarkable ability to conjure nostalgic vibes without actually being cheesy, their sound reminds me of many obscure and cult 80s thrash/speed metal acts yet they have a brazen, bold production quality.

Cataclysmic Insanity is their second album, I haven't heard the debut. What we have is a pure hybrid of 80s power/speed metal with a harder thrash edge, tasteful yet simple lead work, and the dirty vocals of Dan Castro, which summon up memories of everything from Venom to Xentrix. The drumming is great, a lot of parts that might otherwise feel average are spiced up by the fills and beats. "Flying Blind" and "Fear" are pretty tight songs, and "Nightmares" is a total killer with great little guitar fills during the verse riff. That said, there are a few tunes where they use a groovier metal style ala Black Label Society/Zakk Wylde, and I didn't enjoy these as much. "Misguided Path" would be an example of that, didn't care for it.

As I mentioned, the lyrics are sci-fi related, it seems they are based on various books and films but without being too direct. There aren't a lot of 'sci-fi' effects in the music though, this is pretty much pure metal. When Castrofate is thrashing out is where they work the best, but there are a few songs here which felt like filler and dragged the overall album down. 5-6 of the songs show a lot of promise and are worth hearing if you like old school, dirty thrash metal with no regards for trendy nonsense.