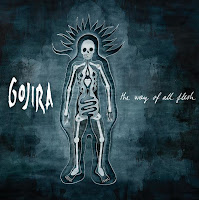 One of the more interesting bands to emerge from France in the past decade, Gojira return with their fourth album, a stunning work of hypnotic, grooving metal which I simply cannot get enough of. This is a pretty unique band, and they've gotten more so as they've progressed, but if I had to compare this to anyone I'd say it occupies a middle ground between Neurosis, Meshuggah and Prong. You could call it post-metal or post-hardcore and probably be just as accurate, but I am not writing a dissertation on scene semantics, so let's cut to the album itself.

The Way of All Flesh has a masterful mix, in fact it's the best mix I've heard this year. Amazing guitar tone, plodding bass, and balanced percussion. Joe Duplantier's vocals sound intense here, harsh and clear simultaneously. The album begins with "Oroborus", and as if you were staring into its endless coils, the world serpent has you directly in its gazed, hypnotized by the groovy tapped guitar riffing and pummeling bridge. The song is capped off in the end with some scintillating ambiance. A truly amazing track, and it's only the first. "Toxic Garbage Island" begins with a post-hardcore slugfest before slamming into you with this slower paced, simple progression of notes which once again hypnotizes. "A Sight to Behold" begins with some synth-like groove, mesmerizing vocal verse and then another of those sickeningly good tapped riffs. There's almost a shuffle in the band's gait here. "Yama's Messengers" is a heavier, mathematical groove with some lovely chords. "The Silver Cord" is an atmospheric, instrumental. The latter half of the album is consistent in quality, dominated by heavier tracks like "Esoteric Surgery", "Wolf Down the Earth" and the percussive "The Art of Dying".

Lyrics are also decent with this album, some good, some not so great, reminding me of a midpoint between Neurosis' pensive rumination and Meshuggah's awareness and precision:

Some tangible poetic insight, if not every inch the peer of the music. The Way of All Flesh is the total package for this band, easily eclipsing their earlier albums in style and replay value. Never aping a particular influence. Never less than intriguing. It's one of the most important metal albums this year and a must for anyone who values creative quality. Sure to be a year's end favorite for myself and many other snobs.