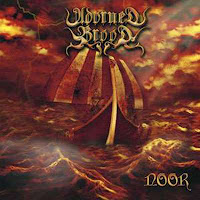 Love them or not, Adorned Brood were one of the first bands to take to the folk metal banner in the 90s, and they have now arrived at their sixth album, a tastefully produced effort which may just be their best yet.

Musically they exist at the crossroads of black and power metal, but Ingeborg Anna's flute and vocals add a unique taste to these, and there are many points of the record which are pure Euro folk with gang shouts. It functions seamlessly, and should appeal to anyone who enjoys the 'lighter side' of folk metal (Korpiklaani, etc.) The album begins with a symphonic intro and then the mighty bombast of "Storm" with its nice acoustic verse, layered in the dual vocals of Teutobot Frost and Anna. "Am Grunde Des Meeres" begins with a folk jig and then crispy blackened power metal sounding riffs. "Sons of the Damned" is more of a black/thrasher with folk breaks, it has some really shitty lyrics though and one of the weaker female vocal performances. They return to form with "Noor" and their raging namesake track. "Under Yggdrasil" is one of the later tracks on the album and perhaps my favorite here. They also perform the "Drunken Sailor" standard and it's kind of fun.

In the end, they've produced a worthy enough album that may find an audience among the folk metal masses. It's not completely consistent, some tracks are far tighter than others, but the production is great, the flute works seamlessly as do the female vocals (without it becoming fairy metal for the most part). The riffs aren't super but they contribute to the whole package.