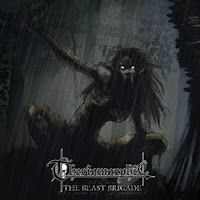 One thing I immediately didn't like about the album is the production. The guitars are chunky, but the vocals and drumming seem rather bland. The bass really takes a back seat, if it's doing anything interesting I just can't tell.

The songs are average. They like to mix it up between faster melodic riffing and very simple breakdowns, and aren't opposed to slower sections like in "Maledict" with some acoustics. This shows they aren't bad songwriters who don't want to bore you by rehashing the same pace again and again, but unfortunately none of the tracks stood out to me. In truth I prefer it when they are rocking out harder like on "Shadowlore" than the slower tunes which seemed mediocre. There is nothing necessarily 'bad' about this band at all, but between the average riffs and dull production, I found no excitement here and it's difficult to write much about the album.