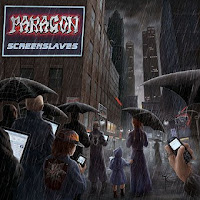 Paragon are one of the flagships bands of the German power metal underground. This is their 9th album, yet they've never really attained the status of popular peers like Grave Digger, Blind Guardian, Iron Savior, etc. In fact, one could consider them a 'poor man's' Iron Savior or Grave Digger, because they use a similar style of the more abrasive, dirty vocals rather than the higher pitched voice of a Gamma Ray or Helloween, as well as the traditional riffing inspired by Judas Priest and Accept.

That being said, Paragon are good at what they do. Very good. This is gritty, no-frills 'power' metal. Instead of adding symphonic elements and overblown big budget production, these guys sound more like they're performing right next to you in your living room. No gimmicks, just metal. "Hellgore" and "Disconnected" present an effective opening combo: pure German speed verse, melodic anthem chorus, and solid performance from all instruments. "Entombed" brings out the mid-paced Judas Priest and U.D.O. style. "The Blade in the Dark" has a nice thrashing edge. "Death Next Door" is a great song as well, pure Paragon.

Interestingly, the band has chosen to include a cover of the Backstreet Boys pop track "Larger Than Life". Now, I know what you're all thinking...why would anyone ever fucking do this, except to evoke ironic humor? Interestingly enough, the cover WORKS. It's difficult to think of the song as something OTHER than heavy metal once you've heard it. Admirable. The album also includes an Italian version of one of their earlier tracks "The Legacy".

Screenslaves isn't going to break the mold, it's not as good nor as catchy as countrymen like Grave Digger or the younger Savage Circus project. But it's still good, and those of you hunting for some more of that pure German power metal can't really go wrong. Also, that cover and title font are so Blade Runner.